Homemade Rice-A-Roni with Lamb and Vegetables

15 October
This really is a variation of Lebanese rice dishes that I've posted on before (with chicken instead of lamb); to see those posts, which include pictorial directions as well as a recipe, click here and here.

I'm referring to this as Rice-A-Roni because that's what it sort of resembles. I've always been convinced that Rice-A-Roni was invented by a Middle Eastern immigrant and after a little research my hunch was (mostly) confirmed...It was taught to an Italian from an Armenian (rice with pasta in it is a stable dish throughout the Middle East). If you'd like to read a little about Rice-A-Roni and the story behind it click here and here.

This is really just a basic rice pilaf dish with the addition of browned pasta (and a few other additions). Anyhow, this is how I made it. Cook diced lamb (or other meat or poultry) in olive oil, then set it aside. 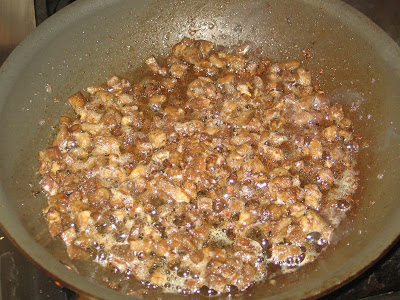 In a separate skillet (that has a tight fitting lid) add broken pieces of vermicelli, a small diced onion, and a little olive oil. Cook it over medium high heat until the pasta and onion begin to brown (stirring often), then add a clove or two of minced garlic and cook it for another minute or two. 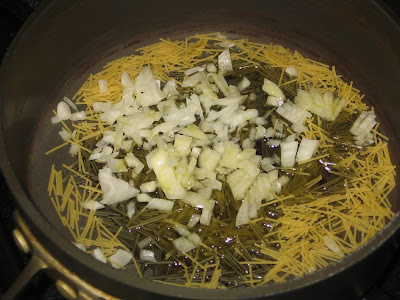 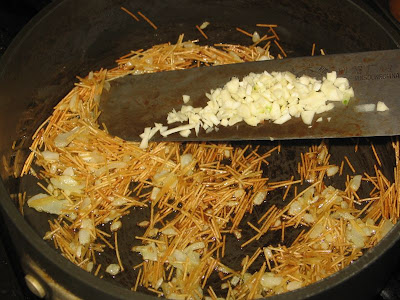 Add the lamb, some rice, and whatever seasonings you'd like (for a Middle Eastern flavor I added a pinch of cumin, cinnamon, and allspice. 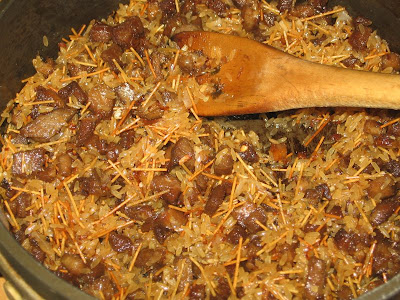 Stir the rice to coat it in oil and flavorings then add hot chicken broth in a two-to-one ratio (I used a cup of rice, for example, so I added two cups of simmering broth). Cover the pan and simmer it for about 10 minutes. 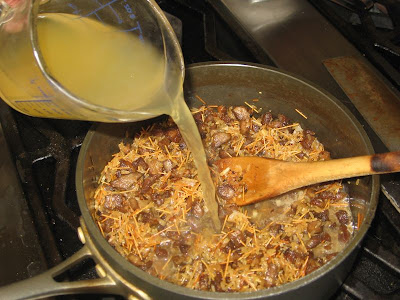 After 10 minutes add whatever vegetables you'd like (I added baby carrots and broccoli florets). Do not stir the rice; just lay the vegetables on top of the simmering liquid and cover the pan again to continue cooking. Cook the rice another 8 minutes, then shut off the flame and allow it to sit for a few minutes. Fluff the rice with a spoon or fork and serve. Delicious (leftovers are even better). 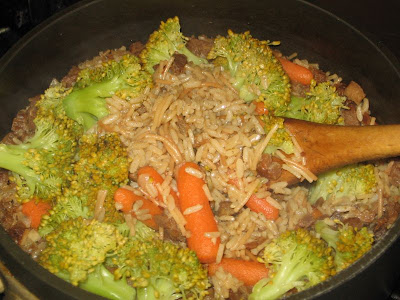