Too Close For Comfort

I came across the above photo at the Facebook page of Car-Free America. It is--as it's description says--the Oriten, a ten-seat bike made by the Orient Bicycle company. I had never heard of such a thing, but after Googling it I was surprised to see that it was quite popular around the time it was manufactured (1896); there were even races designed specifically for bikes with ten seats. When I look at the photo(s) a few things come to mind. One is I'm wondering if there was any frame flex with ten grown men sitting on it. Another is, I wonder how fast they could go with ten men pedaling (and that's a lot of responsibility for the guy steering). And lastly, and this is just a personal one I suppose (but aren't all opinions)...it just looks a little...well...a bit too close for comfort being sandwiched in there like that. At any rate, it would likely be a fun night out with the guys...having a few pints and not worrying about who's driving home (I also wonder if you could ride it with just two or three guys...the thing must have weighed a ton). Anyhow, here's a few more photos I came across. 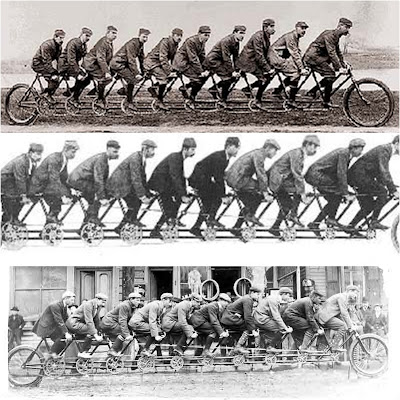 the_big_smile said…
Back in the 80'ties I was member of a bicycle club in Erlangen/Germany.
They had a bike for 8 persons for use on carneval.

It was built with huge tubing, a motorcycle fork an motorcycle wheels for stability.
I can't say anything about speed, but keep in mind, that the 10 persons on your picture produce the wind drag of about one or perhaps two cyclists, but they have the power of ten cyclists!

But a vehicle like that is hard to steer! I tried to do little round on a 4 person bike in that club. I was alone on the bike, so I didn't have too much more weight, than on a usual bike. And for it's length it was really hard to steer!
December 18, 2011 at 5:44 PM

Joe said…
Wow Stefan...a bike built for 8...that must have been difficult to ride. Do you have any photos...I'd love to see one. I also imagine it would be difficult to steer because of its length.
December 18, 2011 at 8:55 PM