30 March
I took a couple days to "chill out" this weekend and go to Toronto...need to do this now and again. One of the reasons I went this past weekend was to see Dr. Wayne Dyer, he spoke at the Metropolitan Convention Centre. The talk he gave was based on his new book regarding the Tao Te Ching. The talk was ok, but I felt like it was a lot of the same stuff that I've seen him speak about on his PBS specials. Nonetheless, I enjoyed myself and it was a nice time.

One of the (many) things that I've always loved about Toronto is it's incredible bike culture. Bikes in the city of Toronto are a way of life. You see people of all ages and all walks of life riding bikes as everyday transportation...and in all kinds of weather. This past weekend it was -2c (which I take as being around 30F), and the streets were packed with bicycle commuters.

Before I left Buffalo I contemplated taking a Greyhound bus, something I haven't done in years. I could have taken my sweet little Dahon Vitesse and zipped around the city. But no..stupid arrogant me had to drive my old inefficient vehicle all by myself just for the convenience of driving when I wanted. Here's the equation I come up with: 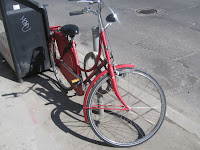 I came across this bike on Yonge Street. It's a Bakfiets. It's a Dutch bike company that also produces various cargo bikes...you don't see too many of these this side of the Atlantic. 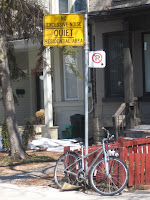 This bike was on a quiet street just north of the Kensington Market. There's nothing too notable about the bike other than the sign that it is locked to (click on the picture if you can't read it). I wish I had one of those in front of my house. 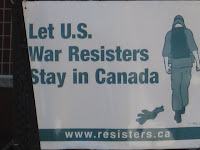 Just down the street was this sign nailed to someones front porch...just one more reason to be thankful I live on the Canadian border. 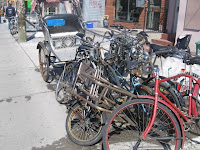 I came across this pile of locked up and rusted bikes in the Kensington Market (click on the photo for a larger view). Note the old French delivery bike, and the bicycle rickshaw. 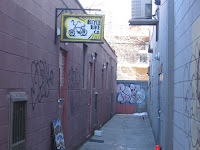 Almost directly behind this pile of bikes, and down a short alley, was this bike company...wonder if it was an advertisement of sorts. 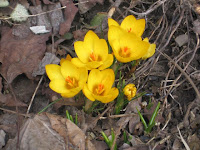 Upon returning home to comfy old Buffalo I was greeted by these flowers pushing through the weeds, leaves, and garbage in my neighbor's front yard...a sure sign of spring.