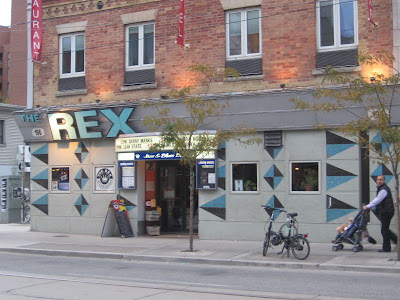 Yesterday I went up to Toronto for a quick 24 hour sojourn. I do this a couple times a year simply for a change of pace; I'll spend my day/evening alternating between bookstores, cafes, and nightclubs. It's such an easy trip...under two hours if traffic on the Peace Bridge and the QEW cooperates. I've done this since the first time I went there clubbing back in the day (around 1980, when I was 19...you can now do the math). It has, in fact, been many years since I've felt like a tourist in Toronto...I look at it as a sort of much larger cousin to Buffalo...only distinctly Canadian. Anyhow, in all these years I have never...believe-it-or-not...ridden a bike in the city. I love walking in large cities and have always don so there. To make a long story short, after recently having pain in one of my feet I have found it painful to walk long distances (an injury, maybe? more likely it is simply from working on my feet and rushing around kitchens for the past 30 years). I've also owned a folder for the past couple of years...so it was only a matter of time before I folded it and brought it with me. My folder is in the above picture parked outside the Rex Hotel on Queen West (my apologies to the guy in the photo pushing the stroller...he looks a little startled).

Anyhow, after watching a couple sets at the hotel and being sufficiently fortified I went out for a spin. I had such a nice ride. It was a lovely autumn evening and the city was vibrant. Being a Buffalonian I am not accustomed to the sheer numbers of cyclists on the streets...it was inspiring. I ended up riding around for a couple hours seeing neighborhoods I otherwise would not if I were on foot. I know there are at least a few Torontonians that read this blog and I'll just say this: you should be very proud to live in such a vibrant and bike-friendly city.

I have a feeling that my folder is my new means of transport when visiting Toronto (and other cities for that matter...it will definitely be with me the next time I visit NYC).