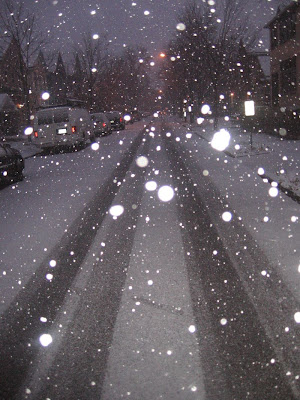 Ahh...those first few times it snows each year isn't it beautiful (though it seems to have come significantly later the last few years...hmmm). I have always loved the change of seasons and particularly the winter (though not as much as I get older). It's these first few snow showers of the year that make me feel like a kid again when I'm out in it. After riding my bike the short distance home from work I could see that the (car) drivers were like lunatics (I saw two fender benders) but still wanted to be in the elements so I walked to the health club for a quick steam and very short swim. I love to ride bikes in the snow, but after seeing how people were driving this evening it felt safer to walk. I had a rather harried day at work and the walk helped...how could you not smile when walking in those big fluffy flakes.