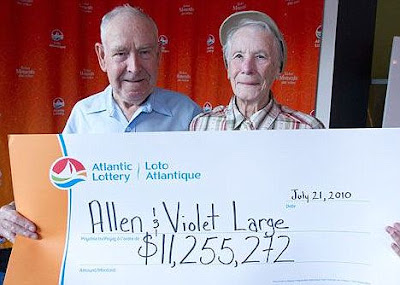 By now many of you have probably heard this incredibly inspiring story, but I was so moved by it I thought I'd post it anyhow. The story I am referring to is that of the elderly Canadian couple, Allen and Violet Large, who won big in the lottery, really big...more than $11 million big. And then they gave nearly all of it away, but they kept the money in their local community. They won't disclose how much they gave to each organization, but they donated money to schools, churches, the fire department, the Red Cross, hospitals, and a cemetery.

I keep saying that I have to start playing the lottery, and that  if I won big I would give some of it away (the key word here is "some")...I have to be honest and say that I don't know if I could do what they did...it is a true inspiration (at least to me it is).


'That money that we won was nothing,' Allen told the Toronto Star. 'We have each other.'

But if I would win such a large sum, I would the same, these two did.
Forget about money! There are many things much more important, than money.
Money may help on making a living, but it probably may not.
Money is just an illusion.
If the FED wants to, the Dollar will be worth not the paper it is printed on.
And by the way, the Euro will be in trouble then too.

The most important thing for humans should be LOVE. (If love would be the only law, we obeyed, the world would be so much better.)
And then it will be usefull to be able to have a shelter and be able to grow food.
And this leads back to Lloyd Kahn....
November 9, 2010 at 4:57 PM