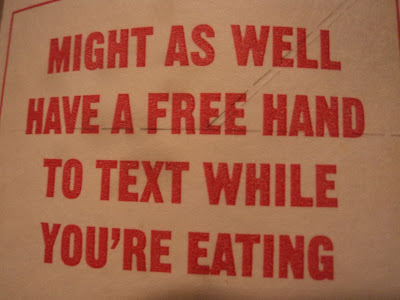 Firstly I would like to say that I am not immune to junk food or fast food; in short I don't believe that just because I cook for employment (and write this blog) that I am a food snob. But I also have to qualify this statement. My version of junk food is potato chips (wish I just had a handful now...they're one of my weaknesses), and fast food to me is pizza or Chinese takeout. But it has been years--decades--since I've eaten at a fast food chain, nor have I eaten frozen junk in many years. But alas...I have a teenage son. Even though his dad works as a professional cook he still craves junk (he is an American, after all). He doesn't eat a lot of it but he does eat some (and he does really like my cooking). Anyhow, this is also a qualifier to some previous photos...often in my Things That Can Be Carried On A Bike series I'll show baskets, boxes, or a trailer full of groceries...and sometimes a frozen pizza box is peeking out. It's not for me...not that I didn't eat them when I was younger, nor do I care what you eat (to each his/her own); I thought I'd mention this. Anyhow, as is often the case--like a typical teenager--when my son gets home from school he is hungry and a quick junk snack will hold him over until dinner is ready or his mom picks him up. And today as I was clearing the table I noticed the spent cardboard wrapper to a something-or-other he had eaten earlier (pictured above); its slogan is written on the outside. What? This to me is so wrong on many levels. Food and our ability to savor it (opposed to just wolfing it down for fuel) is one of our many gifts as human beings I feel...yes, even if it is junk. And again, I'm no angel, I watch the  news or listen to the radio or read if I'm eating alone...but to encourage a person to have a free hand to text seems to jump the shark a bit. I don't know, maybe it's just me...but eating is not just about stuffing things unconsciously down your throat, it's about enjoyment and pleasure; the message on that wrapper is the opposite of this...it encourages haste and numbness to food. Tonight as I peeled the tiny label off an apple as I washed it before dinner I wondered why it was from Washington State and not New York (seeing we are a huge apple producing region and it's in my own back yard). And as I ate it in between mouthfuls of Lebanese Chicken-and-Rice and listened to NPR, I savored its sweet-and-sour flavor and how it played against the flavors of the fragrant rice. But mostly, while I ate...I used both hands. Food is good and I enjoy it. I don't want to have a free hand to do other things while I eat...especially text someone. I'll get off my little soapbox now.