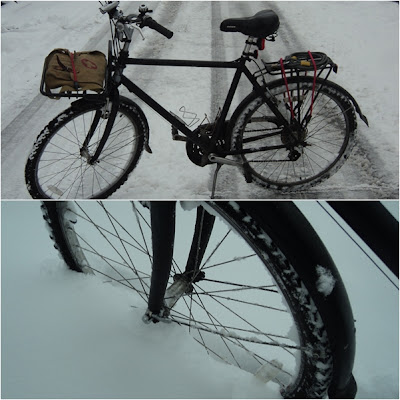 I love the snow, I really do...but not in late March. I'm a realist and know that living in Western New York we will not see truly nice weather for a while but I thought we were done with the snow for the year...at least the really heavy stuff. The streets have been dry, for the most part, for the last couple of weeks. Then this morning we woke to a few inches of heavy snow...blustery, too. And it has, at various rates of intensity, been snowing ever since...just a few flakes as I type these word. I'm guessing we have about 8 inches/20cm on the ground now. And I really wonder if the city's snow plows are put up for the season because not much is plowed. On the way to the health club tonight I huffed and puffed through the snow so much that by the time I arrived I felt like I did my workout already (one of the many benefits of bicycles). And because the streets are not plowed there is a sheet of ice under the snow. There were points while I was riding that I actually hopped on the sidewalk (pavements)--which are mostly not shoveled--for fear of being hit by a careening car...it was as if people forgot how to drive in the snow. As I mentioned many times before--regarding riding a bike in the snow--I am not worried about falling off a bike so much as I am about getting in harms way with a car whose driver failed to change their habits in the snow. Anyhow, just had to get this off my chest...I'm dreaming of nicer weather (but six months from now I'll likely be commenting on how hot and humid it is). As the local adage goes: If you don't like the weather in Buffalo, wait a minute.