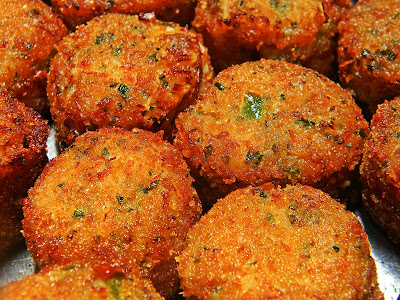 We made these crab cakes while at work today and I thought I'd post a recipe. When I came home and searched my computer for the recipe I was surprised (a little) that the only one on my hard drive--and one I had forgotten I had--was the crab cake recipe from the original Park Lane Restaurant. I did short stint as chef at the Park Lane when it was already way past it's prime, and I had the opportunity to have dinner on more than a few occasions with Peter Gust Economou. He lived in the condos next door and said he enjoyed to eat with the chef. At the time he was an old man and I was a young man and I found his stories fascinating, His legend was larger than life, at least much larger than he was when I met him. When I was hired at the restaurant I was told that he ate there every night. And when he asked for me--that he wanted to meet the new chef--I'd be lying if I said I wasn't more than a bit intimidated. When I went out to meet him he was just a very old man in a wheelchair sitting with his personal assistant. He was very nice to me and liked to talk about the past. Shortly after I had left I heard of his passing. When he was a young man, I am told and have read, he was quite the character...and had the ego to match. But when I met him he was just a nice old man. He was a powerful man in his prime and now I wonder how many in a generation younger than I even remember him. No matter how much money we have or how much power we control none of it really matters. In the end we are all the same and leave these bodies which we currently inhabit...nothing--not wealth nor power--can stop it. OK, I'll pull in from my little philosophical tangent, here's his original recipe for crab cakes. 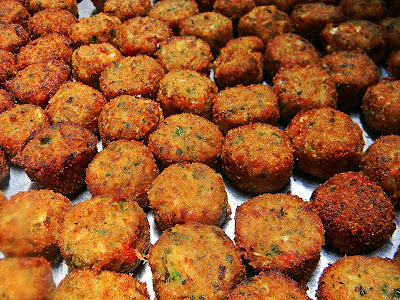 Heat the 3 tablespoons oil in a skillet and sauté the peppers and onions until the onions are translucent but not browned; set aside and allow to cool. Add remaining ingredients, stirring gently. Shape into small cakes. Saute the cakes in a combination of butter and oil until browned on both sides. If needed, finish cooking in a 350F oven for 10 minutes.
Email Post