The Guy in the Green Jacket 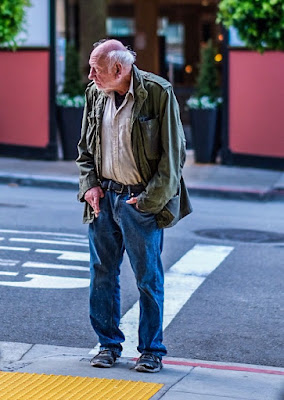 So a few things about this photo, and one is about me. As a photographer I like to think of myself as a street photographer as I live in the city and most of my photographs are of the city while on the street. But this is not a street photographer in classic terms in that I usually do not take candid photos of people without their knowledge. It’s just not my thing and personally feel it’s a bit invasive. Though this is exactly what I did when I took this man’s photo. This is taken from inside a bar looking out onto the street. There’s a dive bar that is close to the “dive hotel” in which I am staying and I stopped for a couple beers last evening. There were only a few patrons in the place and this guy sat at the far end of the bar by himself and in the dark drinking Miller Highlife. Periodically he would go outside for a smoke, and while doing so stare longingly down the street. I’m not sure why this scene called me to take his photo but it did. I myself am often alone but am rarely lonely. There’s a difference. This man, to me, looked lonely. Maybe I’m just projecting. I thought about chatting with him to learn his story but didn’t. Instead just glanced in his direction and wondered what his story is. Everyone has one—a story—and in some ways without ever talking with this man his became part of mine.

“There are two people in every photograph: the photographer and the viewer“—Ansel Adams