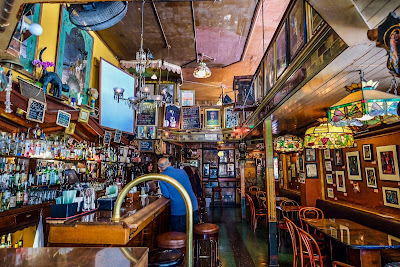 This is Vesuvio Cafe which is across the street (alley, actually... now named Kerouac Alley after Jack Kerouac) from the bookstore, City Lights Books, owned by the poet, Lawrence Ferlinghetti, who turned 100 recently. Vesuvio Cafe, which opened in 1948 was a hangout for Beat writers in the 50s, including those that traveled to the left coast from the east. Mr  Ferlinghetti first published Allen Ginsberg’s, Howl, after hearing him read it live. When I first read, On The Road, by Kerouac, and then other Beat writers during my college years it was life changing to say the least. The the last few times I’ve come to San Francisco I’ve stopped here and the bookstore as a sort of pilgrimage. Anyhow, when I stopped in this morning there were only a few people at the bar having beers (it was 9:45am). As tempting as it was, especially because I am on vacation, I have never been much of a day drinker so ordered coffee. It cost $2.00, and chatting with the bartender, who has worked there since 1987, she told me it was 75 cents when she started and people complained about the price then. After drinking the coffee and chatting a bit with the bartender I asked if it were okay if I took a photo; she said yes. Then, as I’m apt to do if there are only a few people present (whom I do not know), I’ll tell them I’m about to take a photo and if they don’t want to be in it to turn away from the camera. They did this and a couple others actually stepped behind me so they were not in the photo at all. Anyhow, after I took the photo the guy in the foreground turns to me and says, “There, now you have a picture of the back of my bald head.”