A Bike as a Photographic Platform 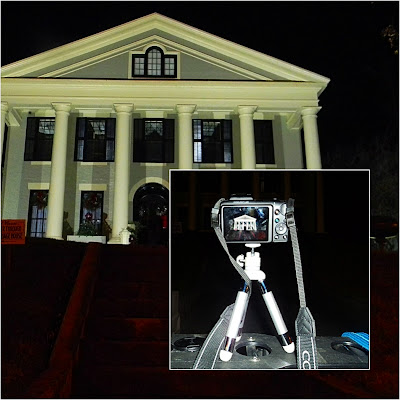 I have posted many times in the past on the usefulness of bikes, especially longtails...but this is a new and interesting one for me. As many of you know, as I ride around on my bike(s) I enjoy snapping pictures with my little point-and-shoot camera(s). And I mostly--especially when it gets dark early--enjoy taking photos at night. The problem is that they often come out blurry because of movement...many of the night pictures you see on this blog were taken by me standing stoically still...lest I shake the camera, which I often do. I have a tripod which is from "my old 35mm days," but it's large and would be a hassle to carry with me always. I've thought about getting a handlebar camera mount (and I still may), but yesterday I invested in a mini tripod which can fit in the same canvas bag that has been pictured in many posts on this blog. What's awesome is that it is small enough to carry with me and it is just the right size to stand on the rear deck of the Yuba Mundo...there it is pictured above as it was snapping a picture of the Wilcox Mansion (the Teddy Roosevelt inauguration site). I took a few other photos tonight to see how it worked, which was superb. Below is a triptych of a Christmas Tree at the corner of Allen and Park Streets...as I was testing it I was also playing with different light settings on the camera. Anyhow, I know that there a re a few bicycling photographers that follow this blog and thought I'd pass this along. I'd enjoy hearing how others take photos on their bikes, or what systems you have devised . 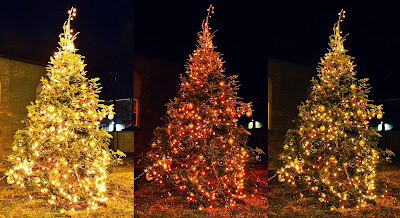