Olive Oil for the Dogs 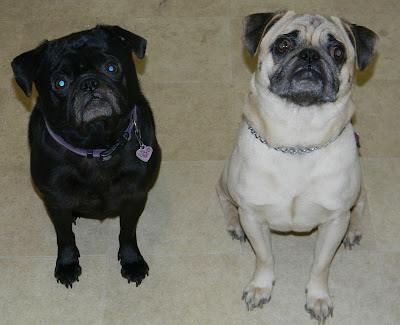 That's Franklin on the left and Maxwell on the right, and they love olive oil. Well, OK...they would love any food I gave them. And yes, while some may find a pug unattractive, I think they are almost too cute...they are great house dogs and companions; and it's like having two little aliens follow me around the house all evening. Anyhow, I'll get to my point. Most know that olive oil, which happens to be my favorite cooking oil, is good for us humans on many levels, but did you also know that it is good for dogs as well, specifically their skin and coat? And this, I believe, is true for any breed dog, not only pugs. But I have  to back up a bit. Pugs, I've come to learn over the last few years, are prone to skin problems; Maxwell and Franklin are no exception. They get rashes and itchy skin so bad that sometimes they chew themselves raw (literally). I've taken them to the vet only to spend big bucks on medications and physician's fees with little results. A few people have suggested putting fish oil on their food, which I did for a while. Recently, though, I came to learn that olive oil is just as good. I put a tablespoon or so on their food in the morning and evening. It took about a month to really show difference but what a difference it is. Their coats are soft and shiny again, and they have nearly stopped scratching...they even smell less "doggy."  The only issue is that now every time I reach for the olive oil when I'm cooking dinner they start going nuts because they think it's their dinner time...

Anyhow, I just thought I'd pass this along to other dog owners.