Things That Can be Carried on a Bike (#448)...plus Dominic and his Dog 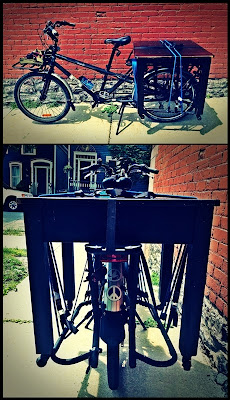 About the below photo...Generally speaking the Things That Can be Carried on a Bike series are pictures of things that I carry on my bike. But sometimes I photograph other people carrying things with bikes that I find interesting. The below photo is one of them. That's Dominic and his dog (sorry...can't remember the dog's name). I was unstrapping the above table from my bike when I saw Dominic and his dog coming down the street and stop at a neighbor's house. I asked if I could take their picture and he said yes. His dog, which looked to be not tethered, just laid there and smiled. Dominic told me all he has to do is ask him if he wants to go for a ride and he hops on the trailer. He also told me they rode in from South Buffalo, which is nearly ten miles from where the picture was taken. Nice. 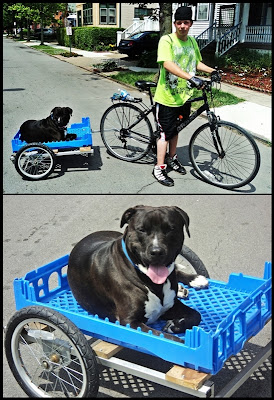 Anonymous said…
Nice pics and his names diesel sorry had to put anonymous lol but I like the pic he looks good
June 11, 2012 at 8:02 PM

Anonymous said…
thanks joe it was nice to met u i like that bike d said thanks to lol and i will thinking bout rideing that way agen to day ..
June 12, 2012 at 1:37 PM