How to Make a Deliciously Flavorful and Healthy Rice Dish 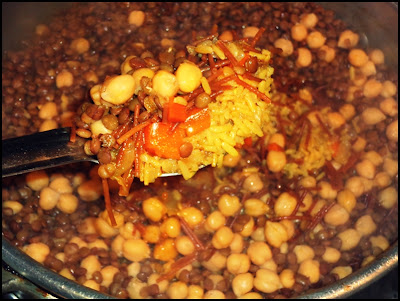 A couple things before I start. Firstly, the title to this post should actually read, How to Make a Deliciously Flavorful and Healthy Rice Dish So Easy and Simple and Hearty and Truly Good Flavored That You Won't Even Notice it Doesn't Contain Meat, but it of course is too long of a title. And secondly, this post isn't about an actual recipe but more so about how to season rice or nearly anything.

I made this today for employee lunch today and started out make a meatless version Lebanese Chicken-and-Rice (click here for pics and recipes), which of course is a sort of homemade Rice-A-Roni (click here for history, recipes, and pics).

Anyhow, the key to any rice dish (to making it flavorful) is to add flavor to it. Rice by itself is not really that flavorful, unless of course it is Basmati, or Jasmine, or other naturally flavored rice. But I'm jumping ahead slightly. In this recipe I used brown rice. I've migrated over the years to using brown rice mainly for health but also for flavor...generally speaking a grain that is whole and in tact (as is the case of brown rice) is more flavorful than its stripped cousin, white rice. 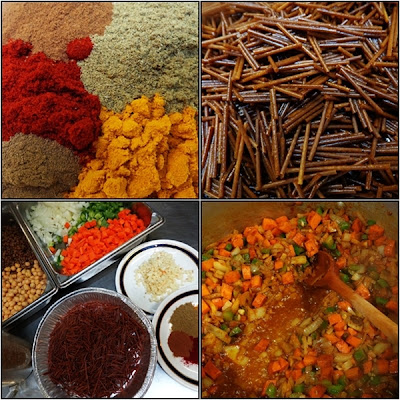 The next thing to consider is what liquid to use as a cooking medium. If you want flavor add broth. Plain and simple as that. If you cook rice in water there is no flavor being added. But when you use broth or stock the rice absorbs the flavor as it cooks. I used chicken broth in this recipe but if you'd like to keep it vegetarian use vegetable broth.

Other things to consider are herbs and spices. In this recipe I used turmeric, cumin, cinnamon, allspice, and smoked paprika. Lots of garlic and onions are a given.

One of the things I think that makes this, and variations of it, really interesting is using toasted pasta. Simply break spaghetti into inch-long pieces and toast it in a skillet with olive oil. When used as an ingredient it adds not only an interesting look and texture, but also a subtle flavor. 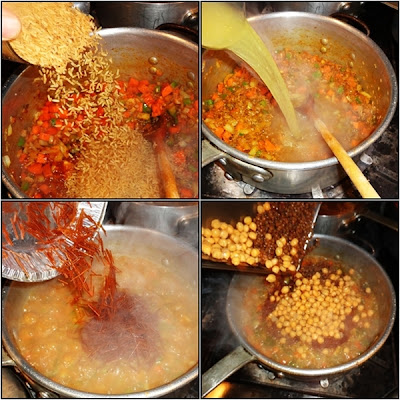 Then the other key thing is technique, and adding ingredients in proper succession. After sauteing any vegetables (besides onion, I also used carrot and pepper) and garlic, then the spices to bring out their flavor. Then add the rice, then the pasta, then any cooked beans (I used chic peas and lentils)...and don't forget a pinch of salt. After adding the ingredients stir it once, bring it to a boil then lower it to a simmer. Cover the pot and simmer it until the liquid is evaporated and the rice is cooked. Do not stir the rice until it is cooked. For brown rice the ratio is generally 1 part rice to about 2-3 parts broth. Cooking time is anywhere from 30-40 minutes. Remove the pot from the heat and allow it to rest for about 5 minutes. When you remove the lid the colors and aroma will be intoxicating...and wait until you taste it....

If you want to add meat to this of course you can. Nearly any type would be delicious, but these seasonings are especially suited for chicken or lamb. Simply brown it and cook it in the rice as it simmers. For printable recipes with "how-to" photos, click here. 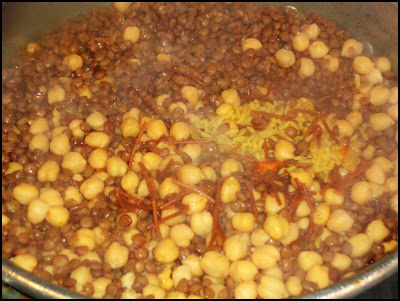