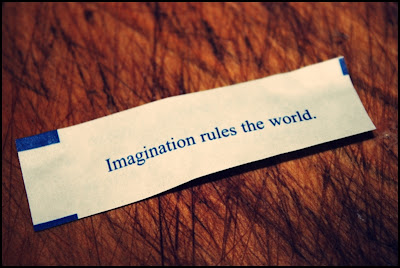 Recently I was in a doctor's office waiting room with my teenage son. I was exhausted after working all day and about to doze off when a little girl brightened my day. She was there with who I'm assuming were her parents; the parents looked as exhausted as I felt. Anyhow, when the father spoke her she would respond with her hand, holding it up like a puppet. And she kept saying, "Daddy, talk to my hand, why won't you talk to my hand, that's who's talking to you," moving it as if it were actually talking to her father. She was as bored as we were and she used her imagination to entertain herself. Anyhow, it got me thinking (it doesn't take much)...when do we adults lose that imagination...that freedom? Is it the bills? The responsibility? The facade we feel we have to portray? Maybe imagination can rule the world...if we let it. Maybe it's right in front of us...

“Truly I tell you, unless you change and become like little children, you will never enter the kingdom of heaven."
Matthew 18:3