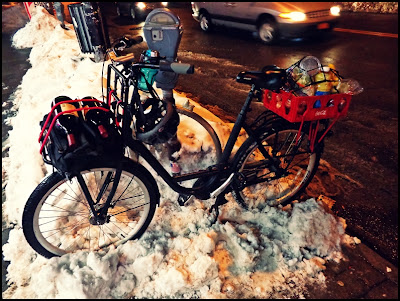 About $30 in groceries, a gym bag full of wet clothes, and two bottles of red wine.

It is difficult to tell but the bike is locked to a city-installed bicycle rack which were installed on hundreds of parking meters (and also free-standing) around the city in the past few years. This is awesome...excellent! I always have somewhere to lock my bike. Well, most of the time. Do you see all the loose snow around the bike; that is because in order for me to get to the bike rack I had to kick snow away from it...it was all but buried in snow. This, I suppose would not be frustrating if this were a rare occurrence, but it's not. Businesses plow their lots and shovel and salt their sidewalks (pavements) but entirely neglect the areas for bikes. I stopped at a chain store yesterday (doesn't matter which one, they're all the same) to see the parking lot and walkway around the store wiped clean, but the bike parking area...yup, you guessed it, 12 inches of snow. As I pulled my bike through the snow up to the rack I could see an armed guard (yes, and armed guard!) who looked to be much younger than I and in much better shape, standing outside talking on a cellphone watching me. When he hung up the phone I asked him if there were a shovel in the store I could use to shovel out the bicycle parking area. Everywhere else is clean down to pavement, why should I have to stand in snow nearly up to my knees to lock my bike, I also said. After a long and bewildered pause/stare (and a look that said he thought I was a bit crazy), he told me that I'd have to speak to the management. So while inside the store I stopped a young clerk and also asked for a shovel. He apologized and said that no need, he would go shovel it, and that he understood because he himself rode a bike. Today I passed the same store and it was still not shoveled. You can see that this obviously annoys/upsets me...and it did for a while. But rather than letting it upset me I've decided to carry a small shovel on my bike (which would be really easy to do) and if needed shovel the bike racks/parking areas as needed. It would take a maximum of two minutes. Hopefully an armed guard won't draw his gun...