This is an easy recipe with many variations. It's a variation of Lebanese Chicken-And-Rice I grew up eating as a kid.

Start by searing a couple chicken breasts until they are golden brown. Use a heav 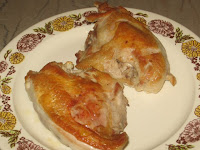 y skillet, sear it in olive oil with the skin-side down first, and make sure that the oil is nearly smoking hot before the chicken goes in the pan. When it is golden brown, remove it to a plate and set aside.

Remove the pan from the heat, add about 8 ounces or so of ground beef or lamb (I prefer lamb, but used grass-fed organic beef because that's what I had on hand). Also add about 1/2 c 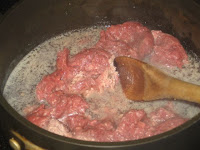 up of water. Return the pan to the burner and bring it to a boil. Mash the beef with a wooden spoon, while scraping any crispy pieces from the bottom of the pan (the crispy bits are pure flavor). Simmer the beef until the water reduces and it starts to fry in it's own fat (which was rendered out while boiling). Continue to cook the meat until it begins to brown, scraping the bottom with the wooden spoon all the while. Transfer the meat to a plate, set it aside, but leave a small amount of fat in the pan. Remove the pan from the heat. 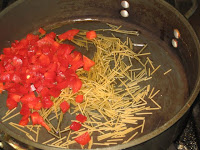 Crumble a couple ounces of dried spaghetti into 1-inch pieces and drop them directly into the pan. Add some diced red pepper (normally I would also add onion, but had none in the house...bummer). If necessary, add a little olive oil. Return the pan to the heat and cook the pasta and pepper while stirring and scraping. When it begins to brown add a couple cloves of minced garlic; cook for a minute longer. 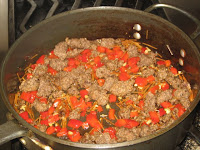 Add the beef back to the pan, then add about a 1/4 teaspoon each of ground cinnamon, allspice, cumin, and black pepper; stir the spices over the heat for just a minute or so. Add a cup of long grain brown rice to the pan and stir it over the heat to coat it with the oil and spices. 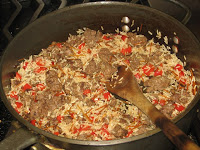 Stir in about 3 cups of simmering chicken broth or vegetable broth, bring it to a boil then lower it to a simmer. Stir it just once, then taste the broth. If using canned broth you probably won't need to add any salt, if using homemade and a little kosher salt, possibly 1 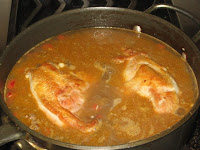 Cover the pan and simmer for about 30 minutes. It will take about 40-45 minutes for the rice to cook, but after about thirty minutes check to make sure that there is enough liquid (in th 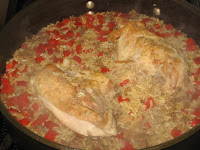 e event the lid was not tightly fitted, or it was simmering to high and too much liquid evaporated). At any rate, add more liquid if needed, but re-cover the pan and cook for another 10-15 minutes. Ad this point remove it from the heat, and let it rest undisturbed for another 5-10 minutes before serving (this allows for the rice to finish steaming and all the flavors to dissipate evenly.
Email Post