It's an exciting time: I recently planted most of my garden, and despite the cold spring this year some of the herbs from last year are flourishing nicely. Besides the usual suspects (tomatoes, peppers, zucchini) I try to mix it up a little bit each year. Thus, I was so excited when I came across little corn plants at the market. I planted two dozen of them, most in my front yard. Their progress is noticeable just in the last few days. I've taken photos, and will photo document them as they grow...but stupidly I cannot find the cable to upload them to my computer...eventually.

Here's an article with a few recipes that I recently wrote for Artvoice: 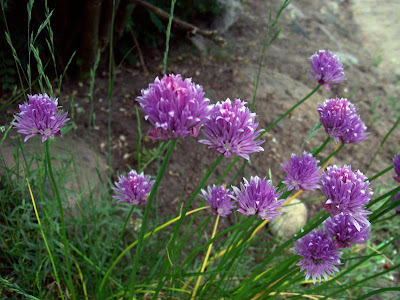 pring evenings of the season, I find myself staring in amazement. No, I’m not looking at the beautiful sunset or anything hokey like that, I’m contemplating a tiny chive plant that has survived yet another difficult winter. It’s one of the first herbs I planted when I moved into this house six summers ago. It was originally just a few shoots connected to a small clump of root when I pushed it into the ground, but now each year it grows so large that I have to cut it back, lest it intrude on valuable real estate in my teeny garden. Each winter its roots hibernate under a blanket of snow, ice, and frozen ground, yet without fail the following spring it pushes back through the soil reaching for the sun, and grows bright green with beautiful purple blossoms.

The sixteenth century French monk, Brother Lawrence (born Nicholas Herman), had such a profound experience while staring at a barren tree on a bleak winter’s day — knowing that the tree stripped of it’s leaves and seemingly dead, would be renewed and blossom in the spring — that he had a religious vision, a conversion. He was eventually accepted into a monastery where he spent many years as head cook, and is said to have never lost that sense of awe.

Now I am in no way implying that I had such an intense revelation while staring at my little cluster of chives, nor is this what lead me to a life in the kitchen, but I couldn't help but consider this: that even after the most brutal winters, each spring these delicate little shoots push through the hard soil and reach for the sun as if it’s their only purpose on this earth.

Along with onions, garlic, and other pungent shoots and bulbs (oddly including asparagus), chives are part of the allium, or lily family. Plants from this botanical family have had as much lore and controversy surrounding them as a film star: they’ve been said to be everything from a natural antibiotic, to hair growth tonic, and even vampire repellent. And while their more pungent cousins, garlic and onions, have been used as folk medicine for eons, chives are more often considered the refined, or subtle, family member. According to the late food writer, Waverley Root, in his encyclopedic book simply titled, Food, one John Randolph, “a gentleman of ” (circa 1770), was a proponent of chives instead of onions. In his book, A Treatise on Gardening, he spoke of them surviving the harsh winters and also that unlike garlic and onions, “chives left no trace on the breath.” But the best part, I think (besides the fact that they don’t make you cry when you cut them), is their delicate onion flavor.

Combine the lemon juice, water, chives, garlic, and salt in the bowl of a food processor and process for a couple minutes. Add the beans and tahini and process until smooth. Transfer the hummus to a plate or shallow bowl and refrigerate for 1/2 hour. Just prior to serving sprinkle with paprika and extra virgin olive oil.

thin slices of lemon for garnish

Heat the olive oil in an ovenproof skillet over high heat. When the oil is very hot carefully place the salmon in the skillet skin-side up. Cook the salmon for a minute or so, until it begins to brown, then turn it over and place the skillet in the oven. Roast the fish for about 7 minutes.

In a separate smaller skillet, combine the wine, vinegar, salt, and pepper. Bring to a boil and cook until just a couple tablespoons of liquid remains. Stir in the chives and remove the pan from the heat.

Remove the fish from the oven and transfer it to a serving platter. Return the sauce skillet to the heat and swirl in the butter a couple pieces at a time. When the last of the butter is almost melted, pour the sauce over the fish and garnish with lemon slices. This is best served immediately.