A while back I read an interview of a Chinese chef, though I can’t remember who it was. Actually, it may have been a radio interview. Who am I kidding, I’m not sure who it was or where I heard it, but I’m pre 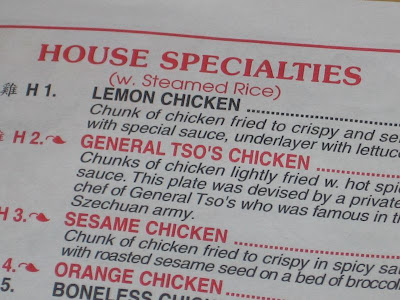 tty sure I remember hearing that you should not eat chop suey in a Chinese restaurant if you want real Chinese food, because chop suey is an American invention. This of course is commonly acknowledged as truth, that chop suey was invented in the mid-nineteenth century by Chinese laborers working to build the western railroad. And this is what I thought about as I waited, the other night, for my order of General Tso’s chicken.

I watched as the cook deep fried the chicken and then quickly stir-fried it with a sweet sauce. How American, I also thought: fried meat tossed in sticky sweet sauce. While I’ve never been to China, it’s a pretty easy assumption that the food at most Chinese takeout restaurants is a far cry from being authentic. I wondered when it made the departure, when this fine and noble cuisine became deep fried and so overpoweringly sweet. How did this particular dish become a “house specialty” at so many Chinese restaurants? And who the hell was General Tso?

The menu at my neighborhood Chinese takeout states that General Tso was famous in the Szechwan army, and that the dish was devised by his private chef. It also says that the recipe consists of “chunks of chicken lightly fried with hot spicy sauce.” There was no mention of it being sweet, which is what it mainly was.

When I was handed my order of chicken I asked the cook if he knew who General Tso was. He looked surprised, and even a little confused; probably no one had ever asked him this. “A famous Chinese General,” he finally said with a grin. “Thanks,” I said, and as I walked out the door I tried to picture myself working at an American restaurant in China and someone asking me who General Custer was. I would without doubt have a similar and somewhat bewildered reply: “a famous American General.”

That evening after my son, Isaac, and I consumed our fried and super sweet chicken I scoured my cookbook collection in search of recipes. None, nada, zip. I had a feeling that it was invented 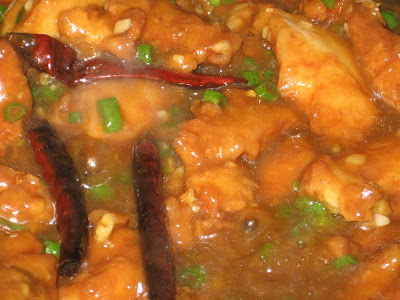 in New York and was surprised that even Craig Claiborne’s tome, The Chinese Cookbook, offered nary a recipe for General Tso’s chicken. I’ve made the habit, lately, to search books prior to the internet mostly because of the sometimes questionable accuracy of the information. But that’s where I did find the information I sought, reinforced by an interesting article archived on the New York Times site. At any rate, my gut feelings (pun intended) were correct twofold: General Tso’s chicken was first cooked in New York, and originally was considerably less sweet.

General Tso (Zuo Zontang 1812 - 1885) was a real general, but it’s doubtful he or his personal chef had anything to do with the creation of this dish. The recipe was reputedly first concocted by Chef Peng Chang-kuei, who apprenticed under Cao Jingchen, one of the most celebrated Chinese chefs of the earlier part of the twentieth century. Born in 1919, Chef Peng immigrated to the US in 1973, and opened a restaurant on 44th street where General Tso’s chicken is said to have been born. It was a popular dish but became even more popular when he Americanized it by adding more sugar and less chilies. The rest, as they say, is history. Having made his fortune, Chef Peng returned to Taipei in the late 1980’s, where there is still a Peng’s restaurant operated by his family. 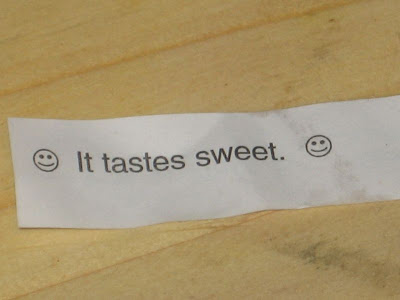 After we ate our dinner that night Isaac opened his fortune cookie (another American invention), and while he chomped away he read it, and then said, “That’s weird.” “What’s weird,” I asked? “The only thing the fortune says is it tastes sweet.” I looked at it myself, and sure enough, bordered by two smiley faces, that’s really all it said: it tastes sweet.

Learning the origin and history of this dish made me want to make it myself. After some trial and error I’ve adapted a recipe from a few different recipes that I’ve come across. It’s far less sweet, and a little spicier. I don’t know how authentic it is to Chef Peng’s original, but I can only hope that the General would approve.

Combine all of the chicken ingredients together in a bowl, mix to evenly coat, and set aside. Mix all of the sauce ingredients together in a separate bowl and set aside. Heat a couple inches of peanut oil in a wok or skillet until 350F. Stir the chicken again, then carefully deep fry it piece-by-piece and remove to a plate lined with paper towel. Cut a piece of the chicken to make sure it’s thoroughly cooked. Carefully transfer the oil to a tin can or other pot to cool, reserving a few tablespoons in the wok or skillet. Over medium-high heat stir-fry the chilies for a minute, then add the ginger and garlic. Stir the sauce ingredients again, then carefully add it to the hot pan. Bring to a boil and simmer for 1 minute. Add the cooked chicken and green onion. Toss to coat. Serve with steamed rice.
Email Post