Here's a not-so-secret, secret: as much as I proclaim the many benefits of riding bikes and walking I still own a vehicle. It's an old one (I'll give you a hint...it's older than my teenage son), but I still have one. And this winter I've been using it more than usual (is it the frigid winter or me just getting older...maybe it's the combination of both). Anyhow, it has been 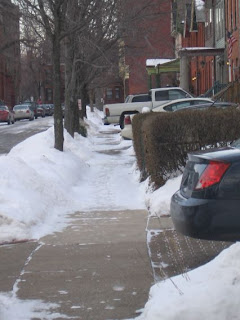 so damn cold this winter that I haven't felt like riding much. For short distances I've found walking much more pleasurable. Now here's where I hop on my little soapbox: What's the deal with people feeling it's OK to block sidewalks with their vehicles. In an old city (relatively speaking) like Buffalo, there are many houses (most actually) in the inner city that were built without driveways, especially on the lower west side and Allentown. This city, like most, was built before the car...it was originally a pedestrian society. Over the years people put in pseudo driveways (parking pads) where their teeny front lawns used to be. And as is often the case, when a person parks on one of these pads they block the sidewalk.

Apparently I'm not the only person in this country (or world) that this bothers. Here's a manifesto on the subject by Michael Hartman, a German pedestrian and bicycle activist. One of the (many) things he describes is how to car walk, or to literally walk across cars that are blocking the sidewalk. He claims to have walked across thousands of vehicles, and on each one he leaves a little note stating the reasons he has walked across the vehicle (some vehicles still had people sitting in them). I first came across this in Katie Alvord's excellent book, Divorce Your Car.

Anyhow (before I hop off my little soapbox), I'd just like to add that I don't expect everyone to ride bikes and walk (wish, maybe, but not expect), this is, after all, the good 'ol U.S. of A...everything in excess...whatever makes things more comfortable. I just wish driver's would begin to take their fellow walkers and bikers into consideration, to consider them as equals.

Anonymous said…
I hear you: I've long since learned that if you leave a gap big enough someone will park their car in it.

I don't agree with Hardtmanns stahce on bike paths though. While it's true some bike paths are dangerous, badly designed or abused and need to be avoided, I still maintain that a properly designed path is safer than road cycling.
January 26, 2009 at 3:24 AM