Snow, More Snow, a Peeve, a Link or Two, and Few Other Things

OK. I know I live in Buffalo, NY. I am fully aware of its reputation for snow, but enough already...it has been snowing for the past 24 hours. It's not been full throttle--if it were rain it would be labeled as a drizzle--but it has been non-stop. Here's a couple of photos; first daytime, then evening (when it finally stopped snowing). 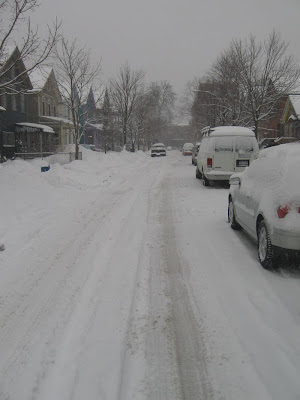 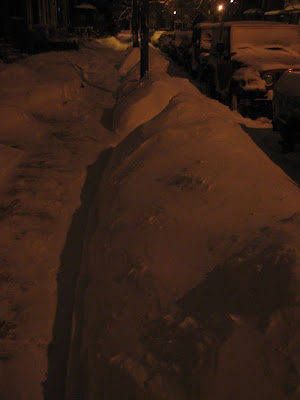 Now for my peeve:

Walking home from work I turned the corner onto my street to be confronted by a pile of snow across the sidewalk, not a natural one but man-made. There's a few apartment buildings on my block and this particular one must have a hired snowplow. Anyhow, as he plowed the driveway he apparently thought the most logical place to push the snow was onto the sidewalk, not giving concern for pedestrians or cyclists. This bothered me so much that I actually went down the street and shoveled off the sidewalk (throwing the snow back into the driveway...returning what was rightfully theirs). Here's a couple photos; before looking north, after looking southward (I've been told, incidentally, that not shoveling your sidewalk in the City of Buffalo is worthy of a fine...whether this is true or not is debatable). As I was shoveling a guy walked by, thanked me, and said something about people shoveling their walks...it made it worthwhile. 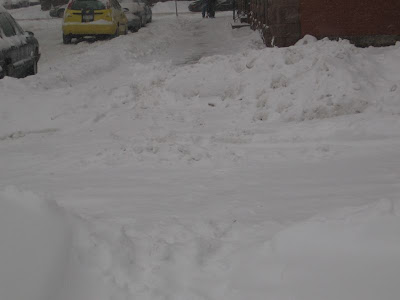 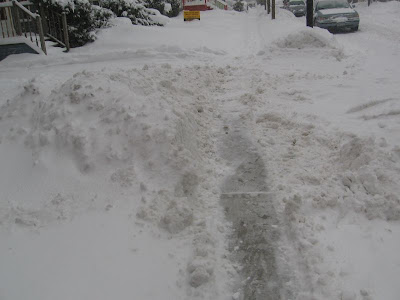 On a different, and less sarcastic, note. I happened upon the website of Portland Design Works recently. I noticed they had an interesting sticker available. It depicts a guy in a chef's uniform smoking a cigarette standing next to a cargo bike. The stickers, (they stated one their website), were free. I emailed them and told them that I would display their stickers on my bikes and they asked how many bikes I had...six, I told them (eight actually, counting the trike and tandem). A few days later six sticker arrived. I haven't stuck any yet, but here's a picture of one. 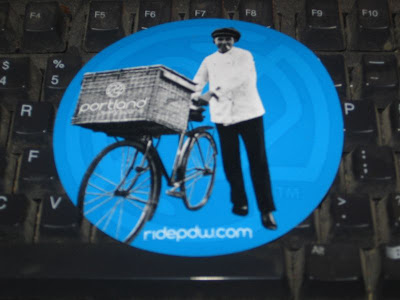 Lastly, I came across this video from a 1973 video of the British bakery, Hovis. It involves biking and bread...two of my interests. It's only a couple minutes long and worth the time. If you want to learn more about Hovis Bakery click here and here.

Anonymous said…
If you don't clear the sidewalk in front of your house here, you're liable for any accidents that occur after 7am because of snow.