Snowy Ride on the Mule and Kidnapped Snakes

I love hauling stuff on bikes...it gives me such a sense of accomplishment, of satisfaction. For various reasons I haven't been on any of my bikes for a few days and was determined to ride one today. Our meditation group met at at our church tonight, which is only about a mile from my house, so I parked the truck after work and hopped on the bike. I used my "everyday bike," which is an old Trek, loaded with racks and baskets, which I fondly refer to as the mule; it's probably my most stable and practical bike for this weather. The roads were pretty bad, it was cold and snowing, but I still wanted to ride (instead of drive), so I took it easy and went slow.

It happened to be garbage night so I was of course on the lookout for good stuff (something that is easy to miss if you are driving a vehicle). I spotted 4 pairs of shutters and hoped that they would still be there on my way home...they were. They fit nicely into the rear baskets and stayed firm with just a couple bungee chords. I'll probably use them in my kitchen. They are solid wood and pretty heavy, which was actually a good thing because they added extra weight to the rear tire which in turn offered more traction. I only spun out and almost fell once, as I was taking a short-cut behind an apartment building and passing a women on a cell phone who I heard say, "some crazy white dude on a bike just passed me." This stuff just doesn't happen when you're trapped in a vehicle. 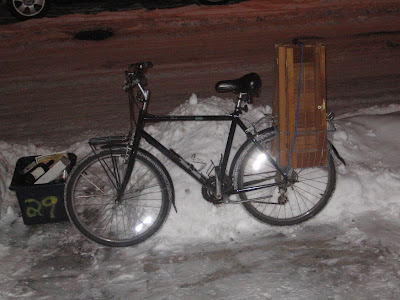 On a completely different note, and I'm not sure this has anything to do with simplicity at all: There have been, it seems, a lot of notes and signs staples to trees lately advertising lost pets. Some are really heart breaking, such as the one I saw recently saying that their lost dog had a medical condition and needed its medication. But this one took me aback a little when I saw it tonight. Not only is it a posting for missing snakes...they were actually kidnapped (or should we say snake-napped). Apparently someone broke into this persons apartment and stole their two snakes (if I were a thief I believe that I would find something better, or at least less slimy, to steal). The other thing is that they stated was if the thieves are not going to return them to at least take into consideration that the snakes have always eaten "pre-killed mice," and that live mice may harm them. This, to me, showed that the owner really does love these animals (no matter how slimy and scary they are to others). But the question I have is that if they only ate pre-killed mice does that mean that the owner purchased live mice, then killed them before serving them to his snakes? Click on the picture for a larger view and let me know if you are aware of the whereabouts of his slithering friends. 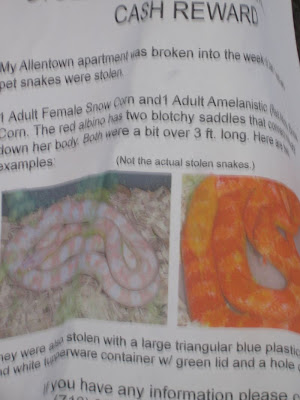 Anonymous said…
You these things, I have read twice, for me, this is a relatively rare phenomenon!
handmade jewelry
February 4, 2009 at 6:06 AM