I've been fascinated with hauling stuff by bike my entire life, and I'm always amazed (and inspired) to see what can be--and is--hauled by bike (or trike).

My cousin, Joe, sent me a link to the Tinguely Museum, in Basil, Switzerland. They currently have an exhibit on the (vanishing) Chinese trike. Here's a couple photos from their website.

(Click on any of the following photos for a much larger image).

They truly are works of art; it's a shame they're a vanishing mode of transport and work...seems to me that our world would be a much better place if more people used their own human power to propel themselves...but here I go again, hopping up on my little soapbox again.

At any rate, last spring I saw this trike on craigslist. It was about 20 miles away, I called the guy, he still had it, so I drove out and purchased it straight away. It's a much smaller version than the one's pictured, too small for me, in fact. But it's still fun to ride, it can carry a great deal of weight...and the comments I get from people are worth it alone. If you'd like to read my original post, and see more photos of it click here. 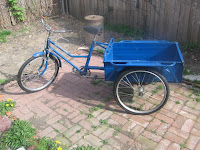 I often scan the Internet for all types of human-powered vehicles, trikes being one of them, of course. Anyhow, here's some photos of them in use.

How's this one for a heavy load:

Being a professional cook, this is one of my favorites. Is that actually a deep fryer? If I had this trike I could pedal around selling Buffalo Chicken Wings at closing time.

I'm not sure the loads on these next two photos would fit in my late-model pickup truck. 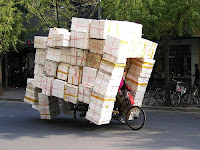 This one may not fit under some viaducts; it most definitely would not fit in a parking garage. 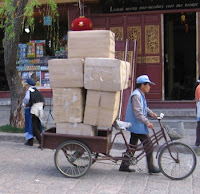 This one reminds me of the short period of time I spent in New Orleans during the mid 1980's. At that time there was still a knife sharpener who carried all his gear on his bike, and would stop by the restaurants in the French Quarter to sharpen the cook's knives (for a fee, of course). But what I found interesting was that his grinder was human-powered, too. I wish I had a photo of it. Anyhow, here's what looks like a mobile work station. 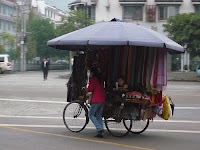 Here's another of my favorites, and this looks like it may be in India rather than China. Is this a traveling mini-temple? Have Krishna, will travel. 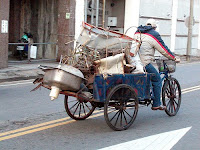