The Awsomeness of Utility Bikes 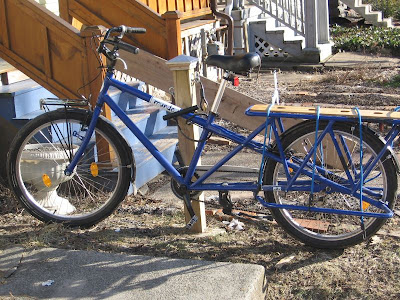 It's been relatively pleasant in Buffalo lately...by that I mean not much snow, though it has been bitterly cold for the past week again. Anyhow, it was a brilliantly sunny day and I rode my Yuba Mundo to work, and then rode my teenage son home on it...cutting the walk time down by at least half. The Mundo really is a hassle to get into the house because of it's size and weight, so if I'm coming home and then leaving again I'll lock it to this "hitching post," which I installed a few summers ago (note the board leaning against the stair railing...I lay it down and use it as a ramp).

Just a mere 4 weeks ago the hitching post was unusable because it was literally buried under snow. You can see a photo of it in an earlier posting by clicking here.

Like many serious cyclists I have a problem...no I'm not talking about a mental problem (though that is debatable), I'm talking about my obsession with bikes...currently I own 7, which includes a small Chinese trike and a tandem. But the main three that I ride these days are the Mundo, the Mule (an old Trek I purchased at a flee market and refurbished...it's the one pictured in the heading of this blog), and a Dahon Vitesse D5 folder. All these bikes are so much fun to ride, especially the Mundo.

When you have fun bikes to ride it really is about the journey and not necessarily the destination. And when you can carry stuff on them...a lot of stuff...it makes it even more fun, and also it gives you a sense of accomplishment (at least it does to me).

Sometimes I tend to take life too seriously; I tend to carry the weight of the world on my shoulders. But I'll tell you this: when I'm on one of my bikes cruising through traffic while people are stuck in their metal boxes it makes me feel good. And when I feel the cold wind of winter on my face, and my fingers and toes get a little cold, I feel alive.

I really feel that if more people would ride bikes the world would be a better place (on many levels). Non-bikers act as if it is such a chore, but to me it is a pleasure...I get excited when I have to go somewhere and pedal, rather than simply sitting sedentary...being out in the elements is enthralling to me. And I really feel that if I can do it most people can. After all, I'm not a spring chicken...I'm closer to 50 than I am 40 but I still manage to ride year round, even in the harsh Buffalo winters.

Lately I've consciously been trying to shift from seriousness (about life) to gratefulness, and I've found that I'm grateful for many things...one of them is my love of bikes and my appreciation for them. When I look at the above picture of the Yuba Mundo I don't simply see a bike. I see a mode of transportation; I see a machine to haul stuff; I see a tool for stress relief and physical exercise (because you will huff and puff when pedaling that thing), but I also see a work of art...it's shape and lines are beautiful...and for that I am grateful.
Email Post

Anonymous said…
What a nice post. I share a lot of your sentiments about bicycling. It's a rainy winter in Oregon, and every day I manufacture extra reasons to plop my son in the trailer and ride around town for the sheer pleasure of it.

I was going to disagree about your comment how serious bicyclists often have a "problem" with accumulating bikes. I was going to say that I am 100% content with my 90s trek. I was going to be a little catty about it. And then I remembered the other two bikes...
March 5, 2009 at 1:04 AM