The Plank Of Gratefulness 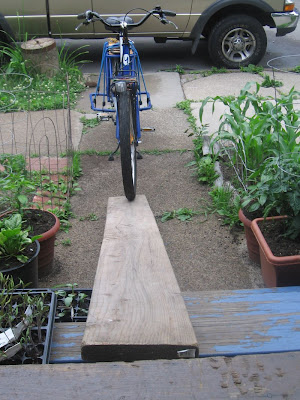 Sometimes I forget...I told myself I wouldn't, but sometimes I do. Often it takes a little tug or a small "pang" to remind me. And sometimes when I'm pushing the Mundo up this plank I remember. Sometimes it stops me in my tracks...literally. What I'm talking about is being able to move nearly pain-free.

I've had minor back problems for a few years...reoccurring every six months or so. But just a little over two years ago I herniated a disc. The day prior I had cut down a medium-sized tree in my back yard...but that's not what did it. Later I was standing half-in a hole using a dull axe whacking at the root full bore, but that's not what did it either (though I believe that was the beginning). The next morning I was at work...a very busy day and I was really stressed (another link in the chain of reactions). My back was aching from the day prior...but that was nothing new, I thought. Then I did something that I and most people do every day...I bent down to pick something heavy up without thinking about it.

I was in a walk-in freezer and picked up (of all things) a 30lb case of frozen peas. It was as if someone took a sharp knife that was made out of fire and ice and plugged into electricity and stabbed me full force in the spine. I dropped the peas and fell on all fours. I couldn't stand. It took me about 10 minutes to exit the freezer (the cold was the last thing on my mind).

By the time I managed to shuffle down the hall to the kitchen my back had begun to spasm...the knife was now being twisted. I left work and took really tiny steps the half-mile home...I used my bike's handlebars as a sort of walker. I later found out it was the disc between my L4 and L5 vertebrae.

OK, to shorten the story a little. I was literally incapacitated for a few days...could not move without screaming...medication did little. For the next week or two I walked hunched over like a little old man and took tiny steps. The thought of riding a bike didn't even occur to me for at least a month.

Gradually, little by little I regained movement. I was lucky in that I didn't need surgery. The first month had many trips to the chiropractor and physical therapist. But in the long run I really attribute my healing to yoga (restorative classes), meditation, prayer, and positive thought...I truly believe in the mind-body connection.
Anyhow, the reason the plank sometimes jogs my dulled memory is that I didn't originally begin to use this for my Yuba (which I do now because that bike weighs more than 60 pounds with nothing on it); I begin using it with my tiny little folding bike, my Dahon Vitesse...the thing weighs something like 20lbs but the thought of carrying it up five stairs at the time was incomprehensible. I rode this bike initially not only because of its weight but because of its step-through frame...it took me more than two months before I was able to lift my leg over the seat of any of my other bikes.

When I did begin to ride again it was very gingerly...I was fully aware of even the smallest pothole or crack in the pavement. I went slow and stood on the pedals at bumps. My first few rides were quite literally a celebration of movement. It was as if I was riding a bike for the first time.

Those first few times I rode I told myself I would never again take it for granted ...and for a time I didn't. But now sometimes I forget...and when I remember I am grateful..I am grateful that I am nearly pain-free and that I can walk and ride. Right now, as I type these words and earlier while I was riding home, I was/am conscious of this. I hope never to lose this feeling of gratefulness because it is beautiful.

Earlier this week as I was putting away a delivery that had just come in and I carried a case of frozen peas to the freezer. I bent (in a very conscious manner) and I was glad I was able to do it. When I stood up it felt good. It was a busy day, and as I left the freezer and returned to the kitchen I took long strides down the hall...I was really grateful I was able. I hope to never lose this feeling.
Email Post