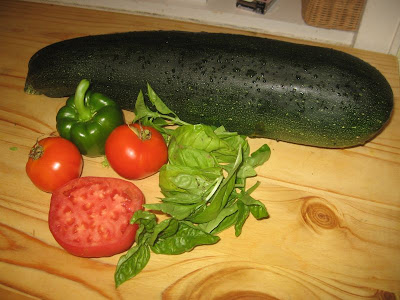 My gardens are not doing that well this year...partly because of the crazy wet summer we've had, but also because of my lack of weeding and trimming (not to mention what the rabbits and slugs have pilfered)...it really is out of control. At any rate, I am finally starting to get a few things, and the items picture above really do spell summer in Western New York. One of my favorite dishes to make with these few items is ratatouille, or French vegetable stew (it normally contains eggplant as well but there's none on either of the few plants hidden in the weeds). This is a dish that can be eaten hot, cold, or at room temperature; served as a side, or over rice or tossed with pasta...I chose the latter. It's a very simple recipe, and one that doesn't need ingredient amounts...this is how I made mine.

Dice everything up...I also included an onion and a couple cloves of garlic. Heat olive oil in a pan and saute everything except the tomatoes. 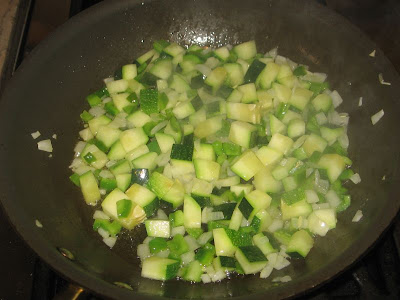 Just as things begin to brown add whatever seasonings you like...I added fennel seed and crushed hot peppers. Saute that for a minute then add the tomatoes. Normally this dish requires a little water or white wine form moisture to cook the vegetables...I chose to add chicken broth for flavor and to make the dish more substantial and nutritionally rich. 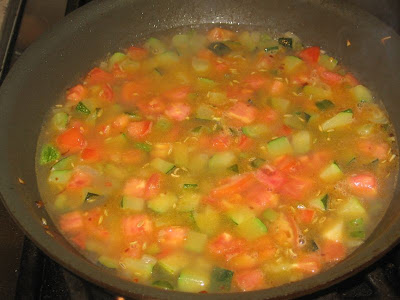 Simmer the liquid until the vegetables are cooked and most of the liquid has evaporated...in the case of broth this translates to pure flavor because the broth becomes concentrated, almost viscous. Toss it with pasta (I used whole wheat) and cheese (I used Pecorino Romano). I ate it two days in a row...day two tasted better than the first. 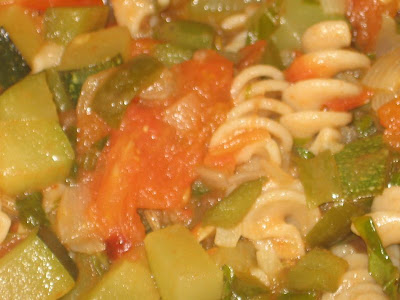