I like this first photo...it really does (to me, anyway) represent two seasons colliding. The last of the tomatoes plucked from their vines...still green because of lack of warmth and just before pulling the plants from the dirt 'till next year...sitting on a sill in front of a newly delivered shipment of firewood for the coldness to come. 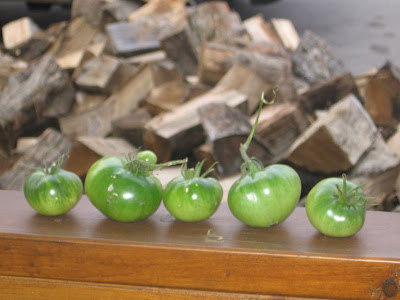 After my son officially became a teenager (last year) he is now required to help his dad (with a somewhat tender back) haul and stack the firewood each year...he is obviously not excited about it as I am. Here are two of the four cords stacked neatly on the front porch; the other two had to be hauled and stacked in the back yard. 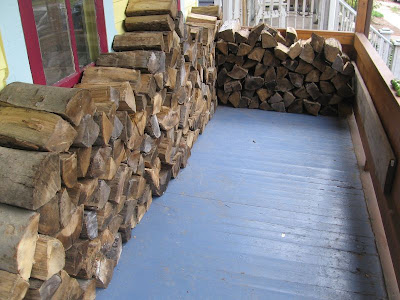 While I was stacking the wood (and when I see this above photo) I can't help but think of the line from the Johnny Cash song, Country Trash...got a pot bellied stove and a cord of wood...name of the song (and the following lyrics), for me, could easily be changed to "City Trash"...and I'm doin' alright for city trash. I just need to remind myself of that last statement now and again.

If you want to listen to the Johnny Cash song (and I hope that you do), click on the below video (it's only audio).