This recipe is really a variation of the classic Lebanese lentil soup (which is often vegetarian). With the addition of lamb and potato it really becomes a full meal (the classic recipe also usually includes spinach or Swiss chard). The soup is seasoned with cumin, allspice, and just a hint of cinnamon. It's also heavy on the garlic and lemon. But like any soup recipe this is really just a guide...the options are seemingly limitless (for a recipe that includes lamb and mint, click here; for a vegetarian recipe, click here). To read an article about Lebanese Cuisine on Sally's Place (written by yours truly many years ago), click here.

Anyhow, this is how I made mine. Besides the lentils, these were some of the ingredients: lamb (from 8 O'clock Ranch), onions, green pepper, and carrots. 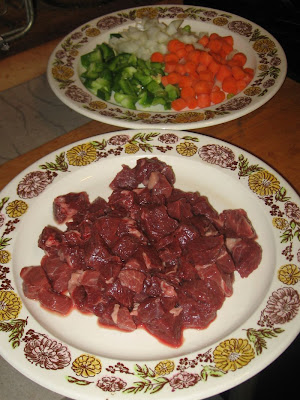 One of the keys to the recipe (I think) is poaching whole garlic cloves in olive. This is done slowly and the flavor permeates the oil. The garlic is removed, crushed, and added back to the recipe later. And the oil (which is permeated with garlic flavor) is used to saute the other ingredients and eventually becomes part of the recipe. 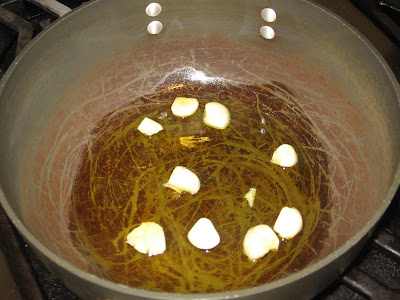 After the garlic is cooked and removed, the lamb and vegetables are seared in the oil. 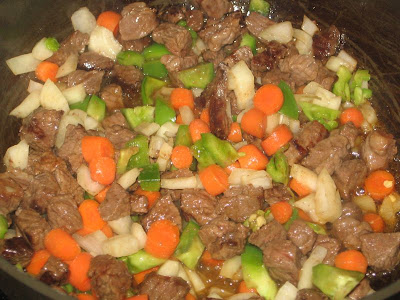 Then I added the garlic (which I crushed) back to the pot along with a diced potato, a can of diced tomatoes, lentils, cumin, allspice, cinnamon, sea salt, a pinch of smoked hot pepper, and chicken broth.

I brought the soup to a boil, skimmed it, and simmered it for about an hour...stirring, tasting, and replenishing liquid as necessary. It was delicious...I'm sure it will be even better for dinner tomorrow. The aromas this dish emits as it cooks (the combination of lamb, cumin, allspice, cinnamon, and garlic...probably) really brings me back to when I was a little kid at my sitte's house. 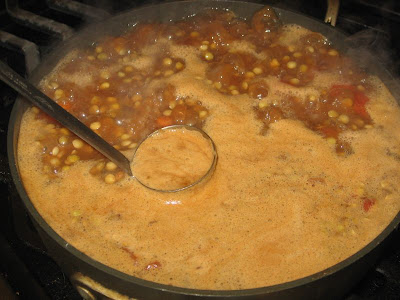 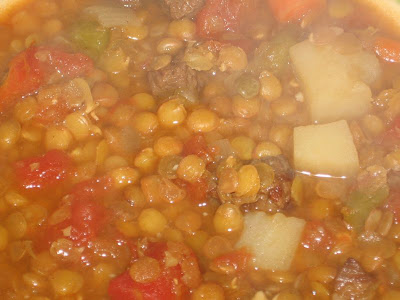 'Xander Labayen said…
mmm this looks so yummy... what did you pair it with? i'm tempted to make sme cumin and cinnamon creme fraiche to top this soup with.

I ate it with homemade whole wheat bread and lots of hot sauce...it was/is delicious. Love your Toronto bike blogs. Thanks for reading.
October 6, 2009 at 9:05 PM