Polenta Bolognese con Uova (made in under twenty minutes)

I am not the type of cook who buys ingredients to make specific dishes (ok, sometimes I do, but not often). My method of cooking dinner usually entails rummaging through the fridge and pantry to see what I have (or don't have). And when you shop as infrequently as I do this is sometimes a challenge. But one of the advantages of working as a professional cook for many years is that it is almost second natural to make something really good out of what is at hand. Tonight, though, there was another factor to consider. When I asked my teenage son (who just had his braces tightened and was in pain) what he wanted for dinner he said he didn't care as long as it was soft. Here's some of the ingredients I came up with, and after I considered how I could cook them into something both delicious and soft, I decided on Polenta Bolognese con Uova, or Soft Polenta (cornmeal mush) with Meat Sauce and a Fried Egg (in a restaurant a meal is worth an extra five dollars if you list it in a foreign language...joking, of course, but it does make it sound more romantic. 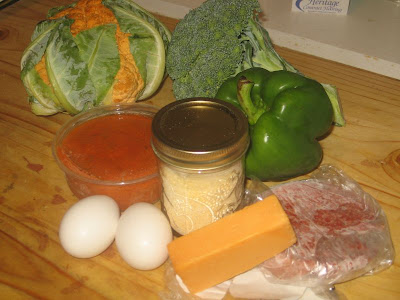 I started with the Bolognese sauce (for a recipe, click here). This is not so much an authentic bolognese version as much as an improvised on; for a base I had a pint of frozen heirloom tomato sauce and a frozen hamburger. I cooked the hamburger "carnita style," meaning I simmered it in water with other ingredients until the water evaporated and the ingredients began to saute in the burger's fat (and a little olive oil). While the burger simmered I broke it up with a wooden spoon. 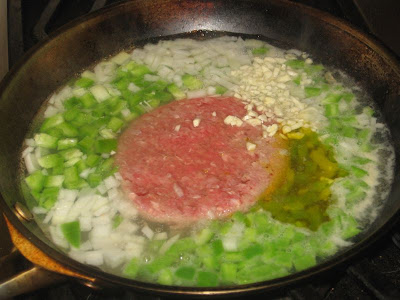 While the burger was simmering I started the polenta by sauteing some diced pepper, onion, and garlic in olive oil. 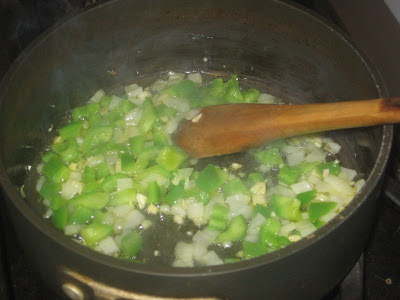 While this was sauteing and the burger was simmering I steamed a few florets of broccoli and orange cauliflower (I purposely over cooked them so they would be soft...no al dente here). 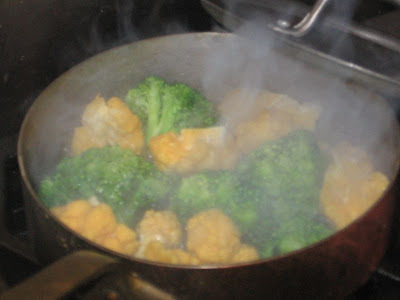 Then I returned to the sauce (the water had evaporated and the ingredients were sauteing). I added the tomato sauce and brought it to a simmer. 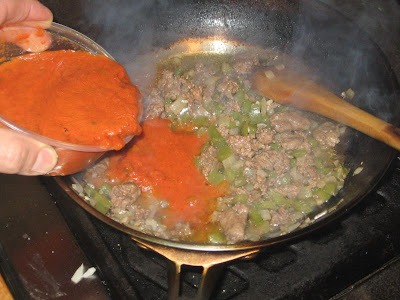 Now I returned to the polenta (for a recipe and how-to video, click here). I added chicken broth, quickly brought it to a boil, seasoned it with sea salt and added a good sized pat of butter. 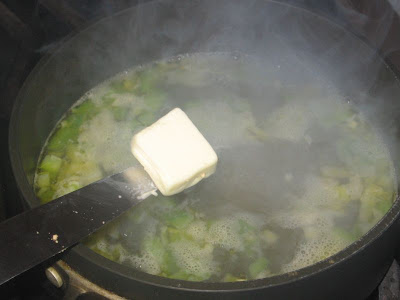 Next I added the cornmeal, and stirred it first with a wire whisk to remove any lumps, then with a wooden spoon for about five minutes to allow the cornmeal to cook and thicken. 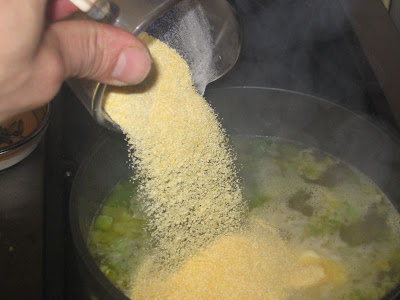 The combinations of ingredients that can be added to polenta are seemingly endless (herbs, cheeses, dried meats, vegetables, etc); I stirred in a handful of grated cheddar and Parmesan cheeses. 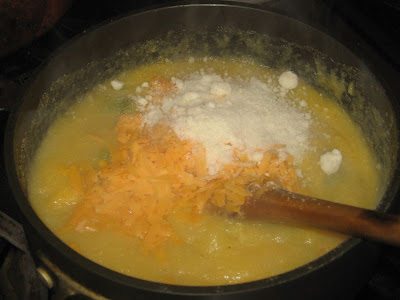 To assemble the dish(s) I first put a mound of polenta in a bowl and made an indentation in the center. I distributed the vegetables around the edge of the dish and filled the indentation in the polenta with a good helping of sauce. While the food was still steaming I quickly fried a couple eggs and laid it on each portion. It was good...really good, said my son...and it was soft enough to eat with his newly tightened braces. 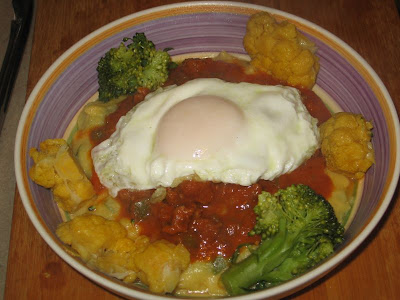 Sally said…
A lovely, "comfort" meal. Polenta is one of those really amazing dishes that can feed crowds and please everyone. Thanks for your recipe!
October 4, 2009 at 3:27 PM