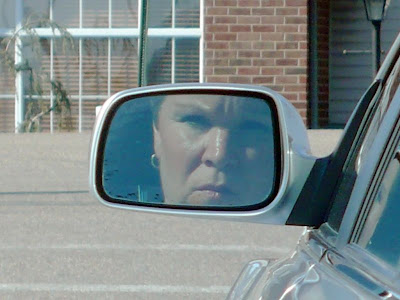 Firstly, a couple things: the woman in the above picture is not the person that I speak of in the following text...I don't know who it is, it just resembles what I saw. I found the image here. Also, when I post these thoughts the last thing I want to do is imply that I am "Mr. Anti-Automobile" (but I do wish there were less of them), because I have a motorized vehicle myself...as stated in previous posts I have never claimed to be car-free, just car-lite...really lite.

Anyhow, the dangerous annoyance is this: people in cars pulling out or turning in front of me when they plainly see me coming...treating me as if I am a lesser vehicle on the road because it is not motorized, basically not taking me (on a bike) seriously. I can't tell you how often this happens. This instance that really P#%@!d me off happened yesterday, and it's the one that prompted this post; it happened on Elmwood Avenue.

I was cruising at a pretty good clip, and as is often the case when I ride down Elmwood (which is bustling, narrow, and has a lot of cars) I scan the parked cars in front of me for anyone about to open a door or pull out. There was one car, maybe three in front of me, where I could see there was a person in it...so I watched but kept pedaling. When I was almost up to it I was close enough to see that the motor was running, so close in fact that I could see the person's eyes in the side view mirror and that she in turn could see me (as in the photo above). When I was maybe half a car-length behind it, still pedaling, she abruptly pulled out, no turn signal...nothing. Luckily I was riding the mule, which has good stopping power. I didn't fall off the bike, nor did I hit her...though I did think I was going to hit the rear end of the car.

Now, I'm a pretty patient guy, but this really got my blood boiling...enough-is-enough already. It was such an obvious infraction that a person who was waiting at a bus stop yelled certain expletives at her that I'd rather not print here. As previously implied, I think everyone has their right to own and drive a vehicle...I just wish it were a law that they ride a bike once in a while to see what it's like amongst the big metal boxes.

Anyhow, just felt the need to get this off my chest. Thanks for letting me vent.
Email Post

Wern said…
I've recently come to the conclusion that they need to add (at least 10 that I can think of) questions specific to bicycles on driving tests to help raise awareness to drivers. Further, this section would be graded seperately and require the driver to score 9/10 before receiving their license.
November 12, 2009 at 11:24 AM

Anonymous said…
I've had similar experiences. Oddle in Germany it seems to be retired men in Mercedes cars.

There is a traffic calming buildout in our village where two way traffic is forced into one lane. I used to wait if a car was anywhere near approaching from the other direction, but then I realised there was no acknowledgement when I did: the driver just ignored me.

In other words, the drivers saw a bike and assumed that this is what happened: cars drive through and bikes/people get out of the way.