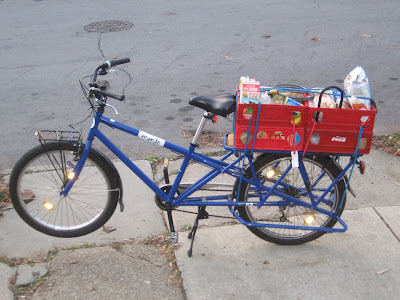 I always love the comments I get while riding the Yuba Mundo...invariably there are some, particularly when it's loaded. On my way home today, for example, I was waiting at a red light when a car rambled up that seemed barley able to run. A window rolls down and there was the immediate pungently sweet smell of marijuana in the air. I could see that there were two guys in the car that looked to be about half my age. The guy on the passenger side (closest to me) gives me and the bike a slow "once over." Then he looks up at me and says, "WTF dude (he used the full expression of the phrase)...did you build that thing?" No I told him, I ordered it...go to yubaride.com. Then as they sputtered away I could hear him saying to the driver, "Go to yubaride.com, dude."
Email Post