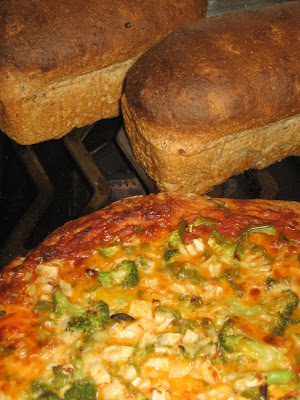 If you are a regular reader of this blog you know two things about me. One is that I like to ride bikes, and the other is that I like to bake and eat homemade bread...a lot. I eat some sort of bread product at almost every meal and have not purchased a loaf in quite some time (OK, recently I bought a loaf of squishy supermarket bread at my teenage son's request..."Dad, why can't we have sliced bread like normal people?").

I am living proof that making wholesome bread at home will not necessarily interrupt the rhythm of your daily life but become part of it...the most difficult thing about baking bread (I think) is time...good bread takes time, you simply guide it along.

And when I make bread I usually make a double batch (it's just as easy as one); this allows for two full sized loaves (one can be frozen)...but I often opt to make pizza out of half of the recipe. Thus, this post is really a variation on a theme. To other posts like this--with different types of bread and pizza--click here, here, here, and here.

This recipe could have been made in an hour or two, but it took me all day--literally from morning 'till evening--because I chose to do so...meaning the recipe revolved my day rather my day focusing on the recipe...it actually became part of my day. At any rate, this is how I did it.

In the morning while I had my usual fueling of coffee and read the newspaper I boiled a half-cup of seven-grain mix in about 4 cups of water. Then I drained the grains, reserving the liquid and pressing as much of the liquid out of the grains as possible. I placed the grains and the cooking liquid on the counter to cool while I took a shower. 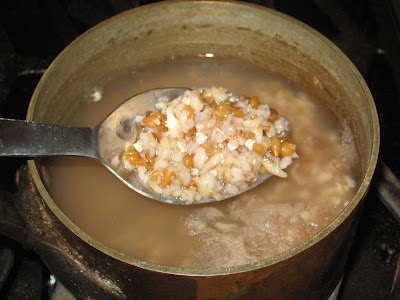 Then I measured 2 cups of cooking liquid and combined it with two cups of whole wheat flour and a couple teaspoons of instant yeast. If there are not two cups of liquid remaining (because of evaporation) replenish it with cool water...this forms the initial sponge, or preferment. This can be left at room temperature for as little as 1/2 hour or up to 12 hours (and in the refrigerator for a couple days); I went out for the day and came back to it about 6 hours later. It was predictably frothy and...well, sponge-like. 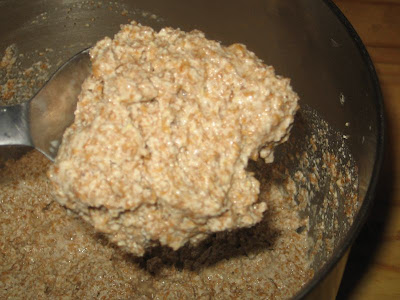 I then scooped the sponge into the bowl of an electric mixer along with the cooked grains. I also added 4 cups of bread flour, 2 teaspoons of kosher salt, 2 tablespoons of honey, 2 tablespoons of olive oil, and a scant tablespoon of instant yeast. After fitting the machine with a dough hook I mixed it on medium speed for about 8 or 9 minutes. 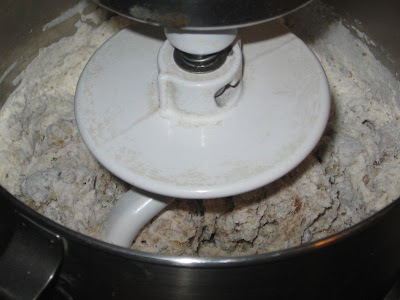 After transferring the dough to a bowl I placed it on the counter (covered with plastic wrap) and then took my dogs for a walk, stopped at a store, then came home and split a few logs of firewood. By the time I came inside a little over an hour had passed and the dough had doubled in size (if more time was needed I could have placed the dough in the refrigerator for up to twelve hours to slow it's fermentation). 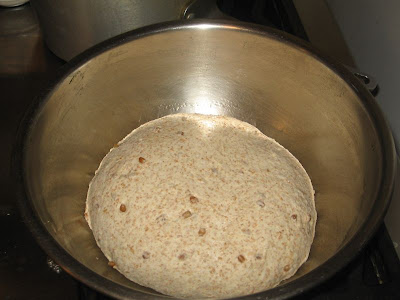 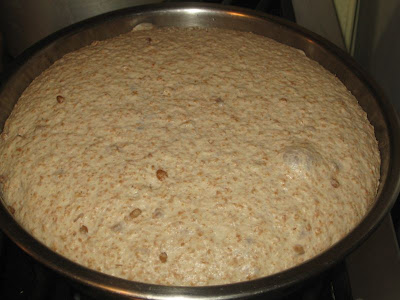 Now here's the fun part: making the pizza. After preheating the oven to 450F I cut the dough into two pieces. One piece I rolled onto a pizza pan and the other I cut into two more pieces and shaped into 2 small loaves.

Pizza toppings are seemingly endless (I usually just use whatever I have at hand) and after scrutinizing my small refrigerator and freezer this is what I came up with: frozen tomato sauce (from this past summer's tomatoes), broccoli, onion, green peppers, and four types of cheese. 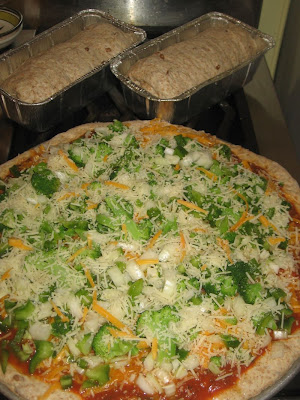 By the time I thawed the tomato sauce and topped the pizza it was ready to go in the oven. I cooked it for about twenty minutes...until it was a crispy, golden, bubbly pie of goodness. After the pizza was cooked (and while my son and I ate it) I baked the bread. It's as simple as that.

One loaf I froze; the other I sliced and toasted for breakfast this morning...the crunchiness of the grains--in both the pizza and the bread--can only be described as three dimensional deliciousness. Bread (or pizza) is not difficult to make. 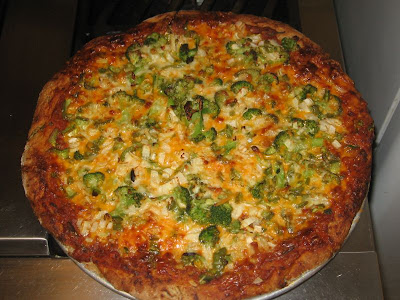