Where are all the bicycle commercials? 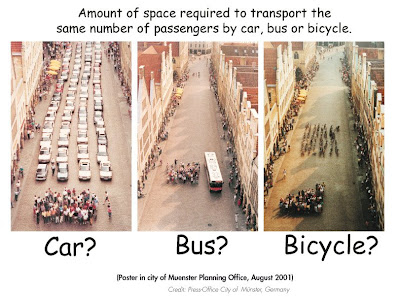 Is it me, or are there a lot of car/truck commercials on during prime-time television? I don't watch much of the idiot box, and very few sitcoms, but I have to admit I really get a kick out of The Office. At any rate, I was alarmed tonight at how many car adverts there were...there seemed to be more than usual (and they are so loud that I actually mute them). I watched two 1/2-hour segments and on my second half I decided to count them. In a 30 minute span there were nine (yup 9) commercials for either cars or trucks screaming at me...telling me what a good deal I could get and how perfect my life will be if I owned one their new and shiny vehicles.

I have only one question: Why do we (in America) never see a single commercial for bicycles...especially one marketed for adults as a viable mode of transport?

I am fully convinced that if a person tried riding a bike again (maybe after abandoning it as a youth) they would find that it is not only a great way to get around but also fun as well.

Jim said…
Nah... most people when they see that we ride everywhere say "don't you get too hot/cold/wet/drenched in sweat.." and their minds boggle when you tell them that you can actually ride a bike more than 3 miles on the flat.... and they look at you as if you are a nutcase/bum who can't afford a car...
Perhaps if we had as many bike commercials as car ones on the idiot box then we could reverse the brainwashing. But I wouldn't hold your breath !
December 29, 2009 at 4:15 AM

I've had a person (on more than one occasion) ask me why I don't own a car...when in fact I do. And when you ride in the snow (which I actually enjoy) people think you're even more of a nut case.

But I really wonder if non-bikers would in fact enjoy it if they tried it...on a beautiful day and flat terrine of course.
December 29, 2009 at 7:58 AM

jerryc123 said…
I'm not sure if there are more automobile commercials, or if there are just fewer commercials of everything else, which means we see the same commecials over and over. With the poor economy, commercial advertising revenue is way down, which leaves just the car ads, bankruptcy and tax advisement services, pharmaceuticals, and personal injury attorneys left on television.
December 31, 2009 at 11:03 AM