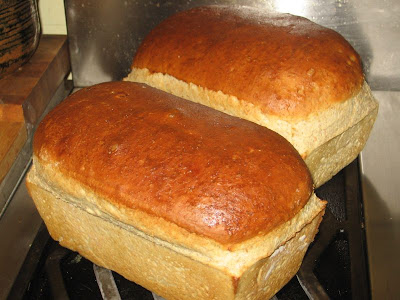 For those who are regular readers of this blog you know that I like to bake my own bread...at home and at my workplace. And over the years I've slowly gravitated towards whole wheat and whole grain breads, for both health and flavor. Well, making my teenage son's school lunches on whole grained bread doesn't always fly. I knew it was coming, then finally the other day I got the question, "Dad, why can't we buy our bread at the store?" I knew what he meant...soft and squishy supermarket bread. I told him that I could make bread like that...he looked dubious. The only thing is that it will go stale quicker, I added, because of the lack of dough conditioners and preservatives.

The difference between a rustic style loaf and a soft squishy loaf is simple: fat, eggs, and sugar. I made a basic egg dough, with the inclusion of honey and butter; I also substituted a portion of the water with milk. I still began the dough with a two hour starter and included 33% whole wheat flour to give the dough a little more texture (enough that it, in my eyes, is healthier than an all-white loaf, and not so much that it was a dense whole wheat loaf). I also brushed it with an egg was before it went in the oven, opposed to my usual spray of cool water. The resulting dough was airy and soft with a golden brown and thin soft crust. The bread was delicious...but the bottom line is that my son ate his sandwich. 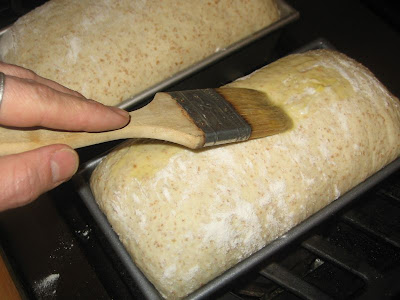 Make the starter by combining the whole wheat flour, water, milk, and two teaspoons of yeast in a small bowl; stir to combine, cover it with plastic wrap and leave at room temperature for two hours.

Transfer the starter to the bowl of an electric mixer fitted with a dough hook. Add the eggs, honey, bread flour, the remaining two teaspoons yeast, and the kosher salt. Turn the machine on low and run it for about 30 seconds, just until it starts to form a dough. Turn it on medium, and while the machine is running slowly add the melted butter. Knead the dough for about eight minutes. Transfer the dough to lightly oiled bowl, cover it and leave it at room temperature for about an hour, or until doubled in size. Then gently push the dough down, folding it into itself, and allow it to rise again for about another 30 minutes.

Remove the dough from the bowl and cut it into two pieces. Shape them into loaves and place them into two lightly oiled loaf pans (measuring approximately 9" x 5" each). Loosely cover the loaves with plastic wrap and pre-heat an oven to 400F. Allow the loaves to rise for about 1/2 hour.

Just before the loaves go into the oven brush them with the egg that has been mixed with milk. Bake the bread for about 30-40 minutes, rotating them every ten minutes r so. The bread is done when golden brown and sounds hollow when tapped with your finger. Remove the bread from their pans and place on a wire rack. As tempting as it may be, allow the bread to cool for 15 minutes before slicing. 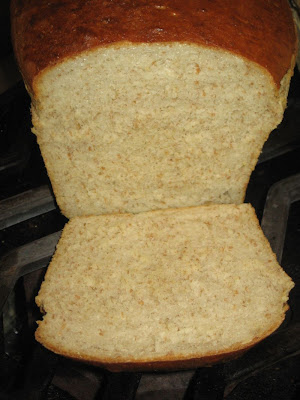 Jack said…
I use this recipe so often, I felt I should say "Thank you!"

Joe said…
Thanks Jack! I'm always glad to hear people are actually using the recipes I post.
November 8, 2010 at 9:36 PM