Bicycles Are Useful In Many Ways 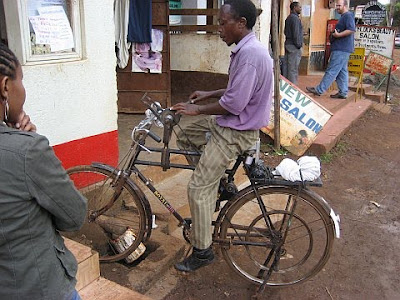 Sure bikes can move a person (or persons) from one place to another using their own power, and yes they can carry things, but they can also do other stuff...like power a knife grinder. The above photo and short video below are of an African fellow who not only powers a bike-powered knife grinder (of his own design) he actually earns his living doing it.

I spent a brief working sojourn in New Orleans back in the mid-1980's (yes, I know I'm showing my age) and there was a guy who used to pedal around the French Quarter on a trike and stopped at all the restaurants sharpening the cooks knives...I doubt that he still does. These are probably things of the past.

When I was leaving the health club tonight it was already dark (no big surprise) and as I was unlocking my bike a woman walked out and said to herself as she pulled her collar tight, "burr is it cold out." Then she saw me getting on my bike and commented that I was "really hardcore" to ride in this cold. To me, riding home was pure luxury. I was inside facing a hot stove all day so being out in the crisp air felt good...and it also meant that I had to do less laps in the pool. Bicycles can move things and people; they can also power things; they also, as a bi-product, burn calories. Bicycles are man's (and women's...sorry for the gender specific reference) most efficient machine. But then again, if you are a regular reader of this blog you already know this.

The picture and short clip were found at AfriGadget.