It was such a nice winter evening tonight that I chose to walk rather than ride. I was walking down Elmwood Avenue when I see these two guys pull out of a driveway onto the street on tall bikes. I have never ridden a tall bike, nor do I intend to. But I do have great respect for the bikes and their builders. As far as I know there are no commercially produced tall bikes on the market, so if you want one you have to build it yourself or have it built. What I really like about tall bikes is there impracticality. Yes, I know this sounds like an oxymoron, but it's not. Tall bikes, to me, do not seem like they are practical at all other than riding them for fun. And that's the bottom line...that's the reason I truly like riding my cargo bikes, particularly the Mundo, because it's fun. When these two guys pulled out onto the street their tall skeletal-like silhouettes looks graceful, almost like giraffes on wheels. Anyhow, as they rode past I uncharacteristically called out and asked if they would mind if I could take their picture. I told them I would like to post them on my blog. The rider on the left is Jason and his friend is Chris. Jason is the builder and also blogs about his bikes (http://hiridingbikes.blogspot.com). After a brief conversation about bikes and blogging they gracefully and giraffe-like lumbered away. Thanks guys; ride on! 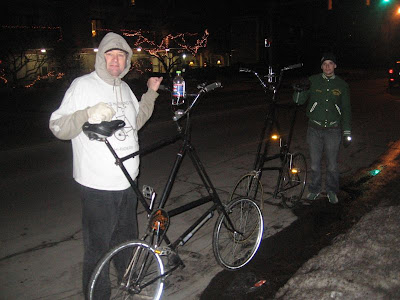 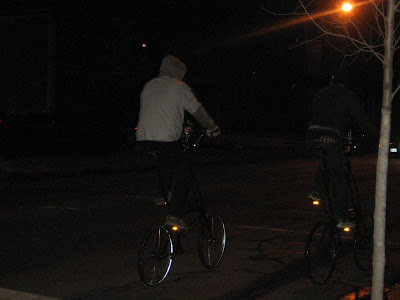