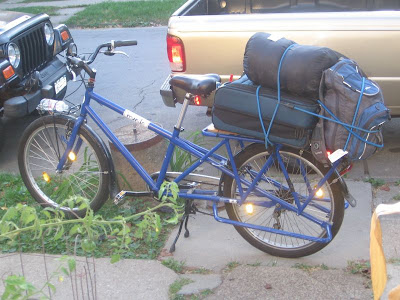 Yup, it's true...the Mundo is for sale. And no, it's not that I don't enjoy it any longer or that I've grown tired of it; on the contrary. I just ordered a newer version; a 21 speed...sleek black color which will be available in mid-March. So I'm selling this one to offset the cost of the new one (and I really don't see the need to own two). I already own too many bikes as it is...I'm considering purging my fleet and donating a few to Buffalo Blue Bike (out of six I really only ride three). Anyhow, this is a really awesome bike...in many respects I hate to sell it; maybe it's the simplicity of it. This bike has really changed my view on what a bicycle can carry and what it can do.

If you are in the WNY are and are interested feel free to contact me for a test ride. The bike is in mint condition (less than two years old). I'll be removing the front rack and kickstand before sale, both were added on...but does include the also added fenders and custom wood top deck (click here to see how I built it). Follow the below link to my craigslist posting; email if you have any questions.