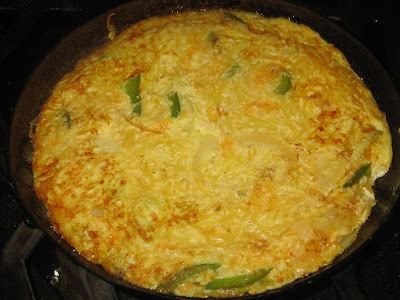 This could easily have been called easy fritatta, or delicious fritatta, but I named it disappearing fritatta because when I made it it looked huge and I intended on eating only half of it...then I went back for another piece...then another, well you get the picture.  Here's how to make it.
Split the squash lengthwise and scoop out the seeds. Cook the squash by either baking it, boiling, or microwaving (I baked mine), then shred the interior with a fork, which resembles spaghetti, hence the squash's name. 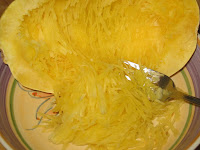 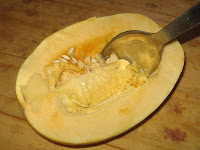 Combine the squash with a couple eggs and other ingredients. I added raw onion, bell pepper, shredded Buffalo Wing Cheddar Cheese, a little garlic, and a pinch of gray sea salt. Mix the items together, then pour them into a preheated oven-proof skillet that contains a few tablespoons virgin olive oil. Place the pan in a preheated oven for about 10 minutes...enough time to pour yourself a glass of wine, cut some fruit, etc. I did eat this with a glass of wine and I couldn't help but think of the title of one of my favorite food books, An Omelet and a Glass of Wine, by Elizabeth David...the food writer who not only inspired the way I write about food, but actually influenced how I cook...but that's another story, or at least another blog post. 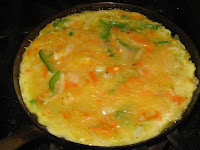 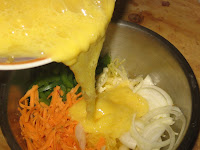 By the time I poured my wine, washed and cut an apple, fed my dogs and toasted a slice of bread the fritatta was done, and it was delicious. 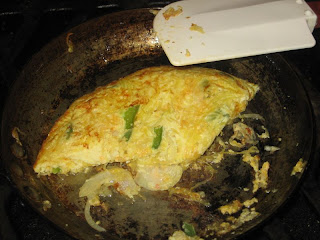