Tonight when I looked in my fridge for ingredients for dinner the pickings were slim. I'm abstaining from meat during Lent (I know, I know, you're not supposed to talk about it) so this narrowed things considerably. My crisper drawer held one vegetable: carrots; I also had onions and garlic in the pantry. I had gone to the gym today for a steam and swim, and also rode about 5 miles in today's heavy snow...in short, I burned a lot of calories and my body craved something both delicious and substantial. Of course I thought of pasta, one of my favorite foods.

This is a variation of the classic Italian pasta dish spaghetti aglio e olio (spaghetti with olive oil and garlic). It is peasant food at its finest, and it is one of my favorite pasta preparations...you can cook nearly anything in your fridge or pantry this way and it is guaranteed to turn out delicious and nutritious.Anyhow, this is how I made it:

Saute carrots and onion in olive oil over medium-high heat for a few minutes (I also added a piece of diced green pepper because I happened to have it). 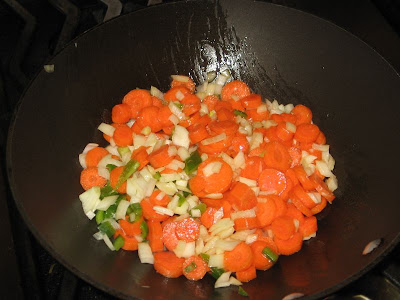 When the vegetables are translucent but not browned, add a clove or two of minced garlic along with whatever other seasonings you're using; I added hot pepper flakes, fennel seed, and basil. Cook this for another few minutes (aren't the colors amazing?). 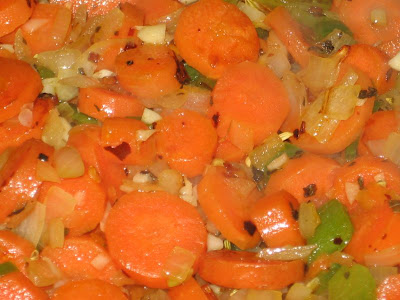 At this point you have to add liquid to deglaze the pan and create a little sauce. I'm a big proponent of stocks and broths, because when you add one of these you are adding flavor to the recipe. But you can also add water (which I do occasionally when I want a dish that is lighter and less rich). Normally I would add chicken broth even though this is a vegetable recipe, but tonight I added vegetable broth (and a little sea salt)...and the outcome was delicious.

The key is that after you add the broth it has to reduce (evaporate) at least by half (which happens rather quickly) in order to concentrate both the flavor of the broth and the primary vegetable. 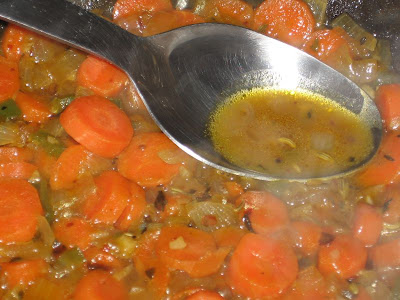 While the vegetables and sauce were cooking I boiled my favorite whole grain pasta very al dente. After draining the slightly undercooked pasta I added it to the sauce. The pasta finishes cooking in the sauce and absorbs flavors at the same time (add more broth if necessary). This could easily be a vegan dish if you didn't add cheese to it, but I have to have either Parmesan or Romano cheese with pasta.

This recipe is proof that even the most mundane vegetable can be made into something truly delicious. The flavors were incredible. I consciously use the past tense were instead of are because I had intended on making enough to have leftovers tomorrow...well, let's just say that didn't work out as planned. Yum! 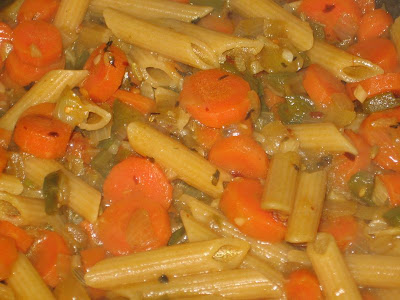