Scary Situation (and stupidity on my part) 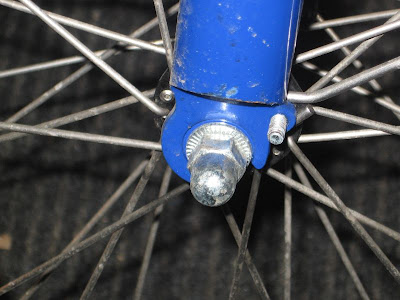 So there I was...coasting down a slight incline this evening. I had just left the gym and felt refreshed; had a couple slices of pizza for dinner on the rear rack. I noticed the front break is rubbing against the rim. Not unusual, I thought; the caliper just needs some adjusting. So I lean forward as I coasted and pushed it aside a little. A minute later it did it again. When I came to a stop light and inspected a little closer I realized it wasn't the break at all, but the rim, more specifically the bolt attaching it to the fork. Yup, both bolts were so loose that I could have easily lifted the tire off the bike...and I coasting down a hill like this (on a sixty pound bike).

This is a v1 Mundo and when I ordered it a box arrived basically containing all of the pieces (when I say pieces I mean it; almost nothing was put together) ...it took the better part of an evening (and some cursing) for me to put this thing together in my living room (according to their website the v3 arrives mostly assembled...I'll let you know). At any rate, I originally attached this bolt, and most others on the bike, about a year-and-a-half ago and have not checked it since (this is where my stupidity comes in). No need to, I thought; the bike is still new and I put it together...think again. In the same way a car has to be inspected yearly I think I'll get in the habit of inspecting my bikes more often for faulty or loose parts. I don't even want to imagine what could have happened if the front wheel came off while I was coasting down a hill on a busy and icy city street.
Email Post