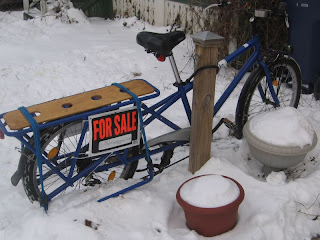 Yes the beloved Mundo is for sale...it has been for about a week or so. I love this bike, the only reason I am selling it is to offset costs of the new v3 model I recently ordered. The new one should ship out in about a month...so I feel I should get more proactive with selling this one (it is going to be difficult to part with). I rode it in the snow today...in the summer, on dry pavement, it feels like your driving a big cushy Cadillac, sort of like a boat, but in the winter, on snowy streets, it feels more like a tank (though I've never been in a tanks, and am really not sure if I've ever been in a Cadillac). Today I also zip-tied a "for sale" sign on each side of it with my email address (the same that is listed on this blog, if you are interested in test riding it); it's rather eye catching. I received two comments so far. One was when I was unlocking it in front of a store: A man who was from Africa (not sure which country) told me he's seen these before and was impressed I had one (I am the one who should be impressed, I told him...see worldbike.org), and another comment was from a guy while I was at a stop light. He yell's over to me, "Hey buddy, how much?" I tell him $700 or best offer. He yells back, "Is that for the bike or for you?" Umm...gotta go...catch you later freakshow.
Anyhow, click here for the current craigslist posting for it.