John Kemp Starley (and a bit of bicycle history) 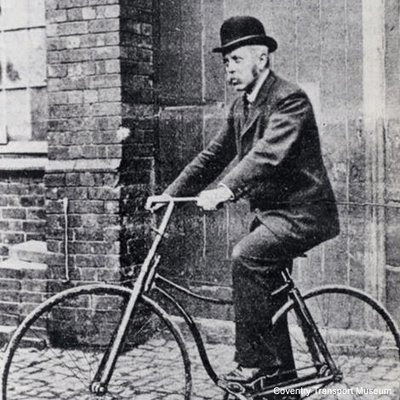 This is a bit of bicycle history that I just learned and thought it interesting enough to share. It's common knowledge that many of today's car companies began as bicycle companies (including Buffalo's Pierce-Arrow), and that the first car builders were in fact former bicycle mechanics. Well this apparently reaches all the way back to some of the bicycle's originators. Case in point:  John Kemp Starley. Unfortunately (or fortunately) for him it happened shortly after his death. Mr. Starley was the inventor of the original Safety Bicycle, or the first bicycle that resembles those we ride today. Even more interesting is that he was the nephew of James Starley, the inventor of the Penny-Farthing, or the old fashioned bikes with the really big wheel in front. John Starely's invention of the Safety was truly revolutionary. Not only was it chain driven and have rear wheel drive, it also had two tires the same size. All of these things made riding a bike much more safe, hence the bike's original name (it was not uncommon for a Penny-Farthing rider to "pull a header," or flip over the front wheel). At any rate, Mr. Starley and his business partner renamed the bike and their company the Rover (can you guess what's coming?). I havn't been able to find how, but a couple sites say that John Starley "died suddenly," and that shortly after his death the company began making motorcycles and then autos with the same name...yup, you probably guessed it: the Land Rover. It's interesting to note that this macho truck began as a humble bicycle. Thanks for inventing and building them Mr. Starley. And while it probably seemed like a good direction at the time, I'm sorry that the bikes morphed into trucks. 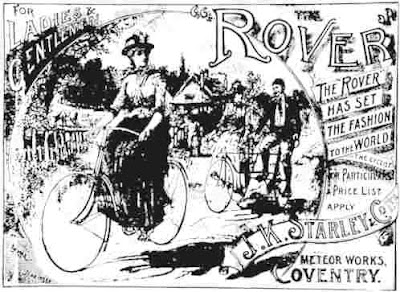