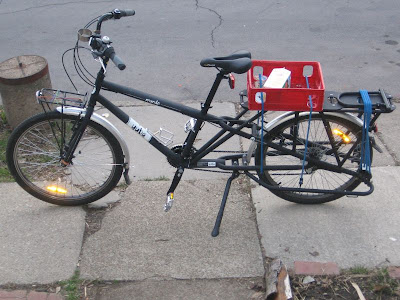 I know this may seem silly, but the other day as I was happily pedaling around town on my Mundo the words of the title to this post came to me: Ride a bike that you like. It may seem obvious, but I don't think it's overtly so. Now this too may be a rash and general statement, but I can't help but wonder if people sometimes purchase a bike because they think (or are told by a salesperson) that it is the type of bike they should be riding. From a personal perspective my bikes have, over the years, sort of gravitated towards bikes that are functional, but also fun to ride. And the later portion of that statement is the most important, I believe. Because if a bike is fun to ride you will want to ride it all the time.

I first started realizing this about ten years ago when I purchased a late 60's Raleigh Sprite from a local bike shop. It was the first bike that I sat totally upright as I pedaled...it was a revelation. Then I purchased a Dahon Vitesse D7 and my eyes were opened even wider...that bike is just so much fun it makes me smile as I ride it. The first long-bike that I owned was the tandem in the photo below. That too is fun, and the memories of riding around town with my son are some I'll cherish forever (he's now a teen and too cool to be seen on a "weird bike" with his dad). I first got into cargo biking when I purchased an old Trek that I purchased at a flea market for $40 and outfitted it with front and rear racks and a trailer hitch. This is when I first realized how fun it was to haul stuff around with my own energy. And then I purchased a Yuba Mundo...well all I can say is this bike rocked my world. This is the first bike that I rode that could carry almost anything my car could and at the same time feel like I wasn't carrying anything...it's big cushy ride is akin to driving a pedal-powered boat on land; or that of a Cadillac. Having multiple bikes may seem, to some, a bit extravagant, but I don't believe this is the case...they all serve separate purposes. Not withstanding, the cost of any one of the bikes is only equivalent to just a few car payments.

I have been an avid bike rider my entire life, and interestingly I can remember as a teenager a friend and I daydreaming about building cargo bikes (they did exist in other countries but the internet did not, thus I was unaware of them). We also designed, but never built, a long bicycle trailer.

My point is, to reiterate...if you ride a bike that you truly like--one that is fun for you to ride--then you will want to ride it; it won't be a chore. I happen to like riding sitting upright; I also really like carrying stuff...I think it's fun. But I realize this is not for everyone. If you like speed, then clothe yourself in spandex and get a racing bike. If you like fashion and all the accessories that goes with it, then get a fixed gear (I can't believe I'm actually suggesting this).

Anyhow, this short video says these sentiments better than I can. I've posted this clip a couple times prior, but it has such a strong message I felt compelled to post it again. I suggest you ride not just to get from point A to point B, or even to save the planet...ride for the fun of it.