Spinach-Parmesan Bread (pictures and a recipe) 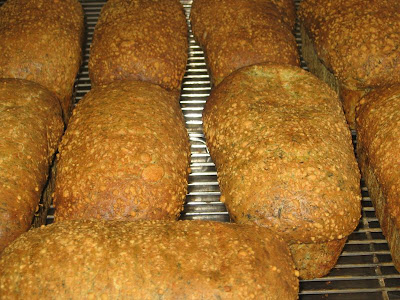 This recipe is an example of how you can take the basic recipe for bread and add other ingredients to make it completely different. I used all unbleached white bread flour in this recipe (no whole wheat) because I wanted it light and airy. The recipe is a large batch recipe that makes 9 loaves, 1-pound each. It sounds like a lot but 1-pound loaves are actually pretty small. You could also make 4 loaves, 2-pounds each if you like (or just cut the recipe in half or quarters). The amount of spinach called for in the recipe may seem like a lot as well (a 3-pound box), but it's not. By the time you squeeze all the water from the spinach you really only end up with a few handfuls. If you'd like to omit the eggs from the recipe that is possible but they do add to the lightness and richness of the finished bread. And finally, like any recipe that I post (or any that exist, I suppose) this is merely a guide, the options are limitless. The vegetable and cheese may be substituted or exchanged for whatever suits your fancy. A traditional written recipe follows the pictures. 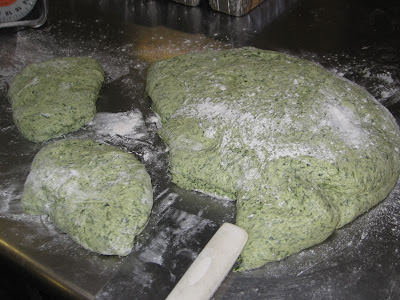 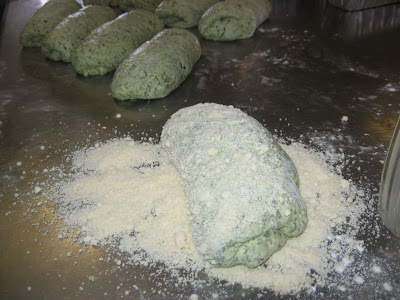 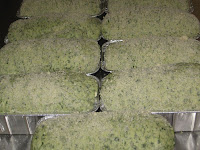 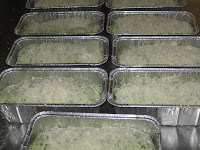 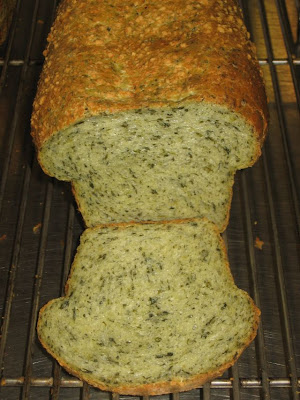 Spinach-Parmesan Bread
Yield: 9 (1-lb.) loaves
1 (3-lb.) box frozen spinach
12 cups bread flour, divided
4 cups water
1/2 cup olive oil
1/4 cup honey
6 tablespoons instant yeast, divided
4 eggs
3 tablespoons kosher salt
3 cups grated Parmesan cheese, plus extra for topping
Thaw the spinach and squeeze out as much liquid as possible; discard the liquid. Make a sponge by combining the spinach with 4 cups of flour, the water, oil, honey, and 4 tablespoons of yeast. Mix this together, cover it, and allow it to ferment fro 1-12 hours. Then add the remaining 8 cups flour and 2 tablespoons yeast along with the eggs and salt. Attach the bowl to an upright mixer fitted with a dough hook and knead the dough on medium speed for about 6 minutes. Then add the cheese and knead it another two minutes. Remove the dough from the mixer and place it in a lightly oiled bowl or tub. Cover the dough and allow it to ferment and rise for about an hour. After it doubles in bulk gently push it down and allow a second rise. Remove the dough from the bowl and cut it into 18 ounces pieces. Shape the dough into loaves and roll them in Parmesan Place the dough in lightly oiled loaf pans. Preheat an oven to 400F; allow the bread to rise for about 45 minutes. Bake the breads for about 30 minutes, rotating them once. The bread should be golden-brown and sound hollow when tapped. Remove the baked bread from their pans and allow to cool on a wire rack before slicing.
Email Post