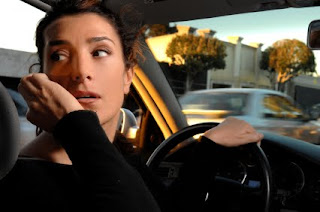 Photo found here.
I have a scary story to relate and am still a little shaken by it. But first I have to say that the above photo is not the person I mention in the story. I don't know who the person was in real life nor do I know who the person is in the photo; it just fit the story.
The story is that I came very close tonight to being hit by a car, and the irony is that I was riding on the sidewalk (pavement), not in the street. I was on the sidewalk because I was riding down Delaware Avenue which has absolutely no shoulder and cars fly past way faster than they should, otherwise I would normally be riding in the street.
Anyhow, there I was pedaling down my familiar route to the gym for a quick steam and swim. And as any bicylist knows who rides a regular route, I was aware of every crack in the road, blind spots around parked cars and buildings, and other problematic areas. So as I approached the parking lot of an apartment building that is surrounded by a 4-foot brick wall I did what I usually do...stand up on my pedals so I can see over the wall to see if a car is about to exit. I didn't see anyone so I sat back down and pedaled.
Just as my front tire entered the driveway a car came swinging out and the driver was looking in the opposite direction, attempting to plunge herself into the rush-hour traffic. This entire event happened in maybe a second or two but it seemed like longer.
Normally if I see a driver coming when our paths will cross I make eye contact...both for my sake and so that they see that I see them. This wasn't going to happen, at least not for a second or two...which was almost a second too late.
It's interesting how you never know how you are going to act in certain situations, or what you will say. It would be different if it were a planned situation but they never are. Anyhow, all I could do was yell Whoa! Hey! She still was looking the other way and I truly felt she was ready to step on the gas pedal and gun it out into the street. At this point I was directly in front of the car, only a few feet away and it was heading directly for me. In that split second, the moment when I really thought I was going to get hit, the only thing that came to mind was: This is going to hurt. I was maybe two feet directly in front of this moving car.
Then, in an instant she turned and slammed on the breaks...screeching to a halt. My right pedal clipped the bumper of the car. I almost fell off the bike.
At this point our eyes finally met and she looked horrified (I'm sure I did as well) and she said something, probably apologizing though I couldn't hear her through the glass. Under "normal circumstances" I would be more sympathizing to her. But in this case the first words that came out of my mouth were: What the f**K is wrong with you? Keep your eyes on the f**king road.
As I pedaled on I visibly shook. And as I pedaled I also thanked God that I was not hit and I prayed for the women who almost hit me...both of our lives would have been changed forever. When I arrived at the gym I sat in the steam room until I was as shriveled as an old pickle. The heat felt good; it felt good to sweat...it felt good to feel.
I guess the moral of this story, fellow bicyclists, is that even on the sidewalk you are not safe from the over-population of often numb and non-aware drivers. Ride, but ride safely.
Email Post

Dr C. said…
I remember reading somewhere that here at least (The UK) you are more likely to be hit as a cyclist if you are riding on the pavement than on the road. It seems counter intuitive at first but having to cross the side roads on the wrong side of the "give way" lines is probably the cause. I had to do some pavement riding yesterday too due to two lanes of traffic forming on a one lane road. Had to keep the speed down to 15 km/h for quite a long way.
March 2, 2010 at 4:19 AM

Anonymous said…
I get off and push now on bad sections.
I am sure there is a good chance that her lawyer would say it was your fault if you had ended up under her car. Ie, you were on the sidewalk, plus it is difficult to argue your case from the morgue or in a coma... killing cyclists is one step up from wildlife for alot of people (drivers).
March 2, 2010 at 8:55 AM

Jim said…
Been there myself. More than once. It seems that no matter how careful we are, there's always someone who is proportunately unattentive. Glad that you came through unscathed. I use these little heart wrenchers as a wake up call. Though I always try to be attentive and very aware of my surroundings, after one of these incidents I redouble my concentration efforts.

On a more positive note, you were the inspiration for my purchase of a Surly Big Dummy cargo bike last fall. I spotted a Mundo (presumably yours) locked up outside the Lexington Coop and was inspired to research the breed. I went with the Surly because I'm VERY tall and was leery of the one size fits all of the Mundo. Love the bike and use it as my daily driver up here in Lewiston.

Thanks for the kind reinforment regarding my previous post...It was, by all means, terrifying.

Jim,
That is awesome that you purchased a long bike...and yes it most likely was mine out side Lex Coop...I don't know of any others in the area. There should be two, soon, though. I ordered a new v3 Mundo which will be here in a couple weeks. My current one is for sale...haven't had any luck yet...let me know if you hear of anyone in the market...they'd get a good deal, and it's a great entree level cargo bike.
Peace
March 2, 2010 at 9:16 PM

Jim said…
Joe, Congrats on the soon to be new Mundo. That's the 21 speed, right? I think that you'll find plenty of uses for the lower side of that gear range. My Dummy is capable of very low gearing and I use it all the time to get up the escarpment as I work in Niagara Falls. I'll let you know if I hear of anyone looking for a utility bike. That price is more than fair. Keep us posted on the new wheels when it arrives,

Premodern Bloke said…
Thank the Lord you are alright!