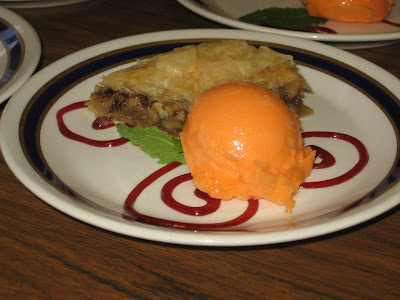 I served this with orange sherbet and fresh raspberry sauce. The recipe is simple to make and it's as delicious as it looks.

Combine the granulated sugar, water and lemon juice in a small sauce pan. Bring the mixture to a boil, lower the heat and simmer it for 10-15 minutes or until slightly thickened. Stir in the rose water or orange water and refrigerate the syrup. Beat the egg whites until they form soft peaks, slowly beat in the powdered sugar, then fold in the nuts and cinnamon. Heat the butter in a small sauce pan over low heat until just melted. Lay the phyllo dough on a cool table and loosely cover it with a clean cloth that has been sprinkled with cool water. Brush the sides and bottom of a 12 by 16 inch baking pan with melted butter. layer half the sheets of phyllo dough into the pan, one by one, brushing each sheet with melted butter. Spread the nut filling across the buttered dough in the pan. Layer the remaining dough across the filling, repeating the process of buttering each sheet of phyllo as it is fitted into the pan. Using a sharp knife, cut the baklawa into diamond shapes taking care not to rip the dough. Bake the pastry in a preheated 400 degree Fahrenheit oven for 20-30 minutes, or until it is golden brown. Remove the pan from the oven and drizzle the chilled syrup directly onto the hot pastry, allowing the syrup to run into all of the slices and crevices in the pastry. Allow the baklawa to cool to room temperature before serving.