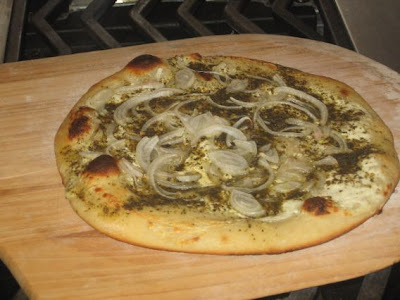 This isn't so much a pizza as it is a sort of Middle Eastern flat-bread with flavoring ingredients on it (but then again that's what pizza is, isn't it...bread with stuff on it). What this is really is a variation of the Lebanese za'atar bread with a few other ingredients...and geeze o' man is it delicious. Za'atar is a Middle Eastern herb and spice blend whose most distinguishing feature (I think) is the inclusion of Mediterranean sumac. It offers a very distinctive sour, almost lemony flavor; it's also a little salty, supposedly from growing next to the sea. The other interesting thing on this pizza is strained yogurt, a sort of Lebanese cream cheese. It's referred to as labneh in Arabic and is made by simply straining yogurt in a cheese cloth...the result is super rich and creamy and can be used as a base for any number of dips or spreads. I also added onion on the pizza...simply because I enjoy them. Sometimes when I make this I also include a small amount of ground lamb that I saute in olive oil, but this time I wanted it sans viande.  If you'd like a recipe (with pictures) from a previous post on how to make an easy and really delicious bread/pizza dough, click here. 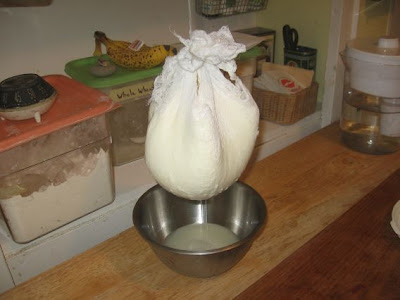 tasteofbeirut said…
What a great idea Joe! Next pizza i will top it with some labneh and zaatar (brought back from Lebanon of course!).
December 21, 2010 at 10:41 AM