An Omelette and a Glass of Wine 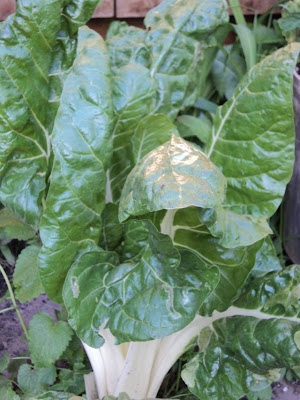 OK, I have a couple confessions. One is that the title of this post is borrowed from a book by the same name (click here). It was written by the late British cookery writer, Elizabeth David, who greatly influenced not only the way I cook but also the way I write about food. And while I did have for dinner what the title of this post suggests, the other confession is that I didn't have a glass of wine, I had multiple. I like wine.

Anyhow, after spending the day in a sweltering kitchen I was in my teeny front yard garden watering newly plated vegetables and wondering what to make for dinner. After almost tripping over a giant Swiss chard plant that grew back from last year (pictured above) I thought...duh...do I need to get hit over the head with this to eat it. My son was at his mom's house and I was home alone and wanted something simple (which I often do), but also something nourishing and good. So I opted for a Swiss chard omelette.

What's better is that an omelette is something that I was able to cook on my new outdoor propane stove (and yes, I did carry the stove home on my bike, click here to see it). The kitchen in my 150-year-old house is very small, and in the summer months even having just one or two burners on can turn it into a sauna. And being a cook by trade the last thing I want to do is go from a big hot kitchen at work to a small hot kitchen at home (do auto mechanics come home and work on their own cars, I wonder?). This said, this new outdoor stove is the first piece of equipment in an effort to creat a sort of outdoor cooking space for the hot months.

The omelette itself is really simple, just a variation on a theme and really more of a fritatta. The thing is with this recipe is that I blanched the Swiss chard before chopping it and mixed it with eggs (along with garlic, sea salt, and dried chilies). I also sauteed a sliced onion, which becomes embedded in the eggs as they cook. With the high ratio of Swiss chard-to-eggs, this is not only a hearty meal but also a delicious one...the combination of eggs, cheese, garlic, onion and hot pepper combined with the slight bitterness of the chard is a memory that makes my mouth salivate as I type these words. After flipping it I sprinkled a little cheddar on it and toasted a couple slices of Ezekiel bread...then I poured another glass of wine.

Here it is in pictures. 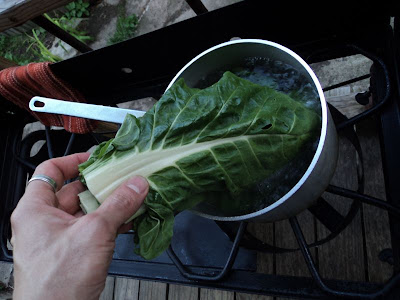 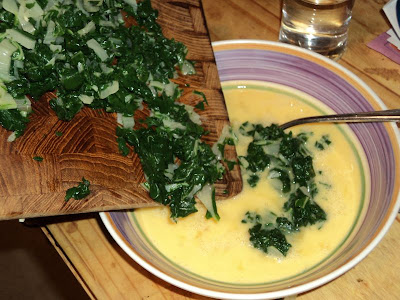 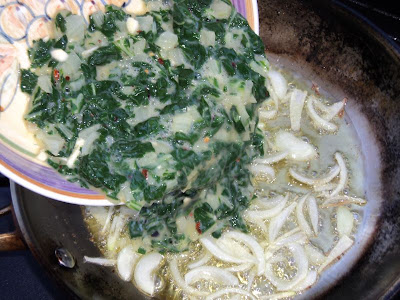 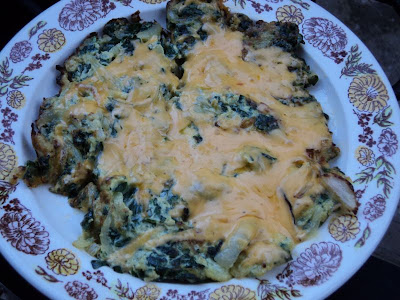 Erin said…
Hi there-
Arrived here after reading your piece in Edible Buffalo magazine. I've added you to my reader and look forward to following along.