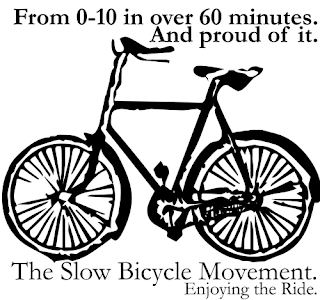 If you've previously visited this blog you know that as the name suggests it is my feeble attempt at recording my thoughts and promoting living simply in the city...using a bicycle as a serious and viable form of transportation is a large component of this (I think). Anyhow, the month of May is National Bike Month and I began to wonder if this will effect anyone in their transportation habits, or if it will have any effect at all. In response to these thoughts I posted a poll (in the sidebar on the left) and would love to have your input...bikers and non-bikers alike. Feel free, also, to leave a comment.


The bicycle is the most civilized conveyance known to man.  Other forms of transport grow daily more nightmarish.  Only the bicycle remains pure in heart.
~Iris Murdoch
Email Post

Dr C. said…
It strikes me as odd how many city dwellers here in the UK drive the short distances between places in an urban environment. The most ridiculous common sight is that of people who drive a kilometre or two to the gym to exercise. I wish we took after some of our fellow Europeans in The Netherlands, Denmark and Belgium more.
May 4, 2010 at 4:56 PM

JOe said…
I couldn't agree more. The health club where I am a member used to have there bike rack directly outside the window of the room that held spinning classes (stationary bikes)...I loved locking up my bike while they sat stationary and "spun."

In regards to your short distances-few kilometers comment...that hits the nail directly on the head. If people only new that sometimes it actually takes less time to navigate the city on a bike than in a car maybe they would switch...probably not.

Have you ever checked out the Two Mile Challenge (http://www.2milechallenge.com)...not sure if it works with kilometers or addresses outside the US but it's worth looking at. Thanks as usual for reading and commenting.
May 4, 2010 at 9:13 PM

Andy in Germany said…
I well remember arriving in a local store on the Xtracycle on a cold day when some reps from the local fitness club were trying to persuade people to sign up for the year. Even when I deliberately said hello to them, they didn't talk to me. I guess they figured I didn't need their club...
May 5, 2010 at 6:44 AM